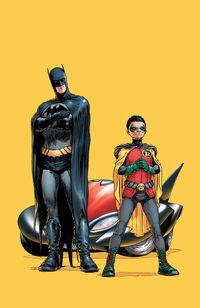 Vol 1: August 2009 – October 2011
The new Dynamic Duo hit the streets with a bang in their new flying Batmobile as they face off against an assemblage of villains. But will everything go smoothly? And who exactly are the new Batman and Robin? The newest era of The Dark Knight begins here!
Vol 2: November 2011 – May 2015
Battling evil with his son, Damian, at his side, Batman now realizes that the hardest part of the job may be trying to work together!
As Batman and Robin try to adjust to their new partnership, a figure emerges from Bruce Wayne’s past: His name is NoBody, and he’s not happy that Batman Incorporated is shining a light on his own shadowy war against evil…