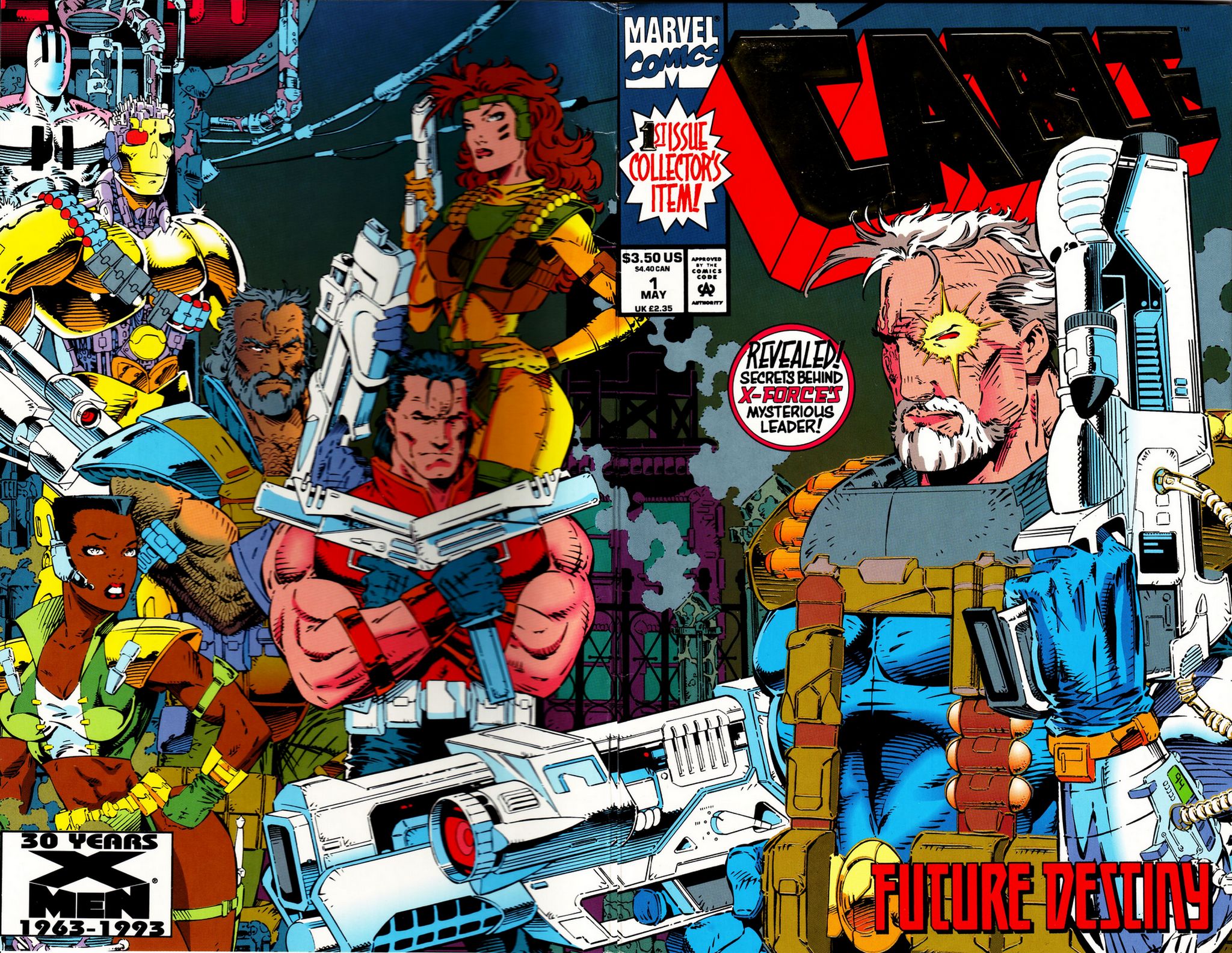 Vol 1: May 1993 – September 2002
The mighty Stan Lee rips through a page of a Cable comic dressed as Cable himself. He quickly explains that this issue deals with time anomalies – stuff even he gets confused by. Out of ados, Stan the Man lets the story proceed.
In Scotland, Moira MacTaggart and her charge, Wolfsbane, are headed to the mainland because of a friend of their’s, Angus, claims that something bad is about to go down. Tying up a port, Angus informs the ladies that Reverend Craig is in the town square harassing a visitor that seems to have appeared out of nowhere.
In the town square, the Reverend is busy preaching hellfire and damnation. He is certain that the “visitor” is Satanspawn due to the glowing yellow eye and the smoke coming off his skin. He dubs the visitor the Devil’s Herald. It doesn’t help that the stranger is speaking gibberish. Moira wants to diffuse the situation and she scolds the crowd for such harsh judgment. Some in the crowd see her point and become a bit more hospitable. Then someone touches the metallic arm to find that it feels alive. New fear is born and the Reverend incites the crowd to kill the man. Cable (for so it is) uses his telepathy to get the citizens to forget their anger and fear and the crowd disperses. Even the Reverend thinks that Moira has claimed Cable as a cousin from England and goes on his merry way. With no one left to condemn him, Cable goes with Moira and Wolfsbane to Muir Island.
Vol 2: May 2008 – June 2010
Cable is back with Baby on Board.
A new ongoing series spinning out of the decade’s biggest X-Men event! The future of mutantkind starts here!
“Messiah CompleX” changed the X-Men forever. But no one’s world has been rocked as hard as Cable, the time-traveling mutant from the future. He’s been charged with the one mission that could save all of mutantkind — or, if he fails, Spin it swirling into extinction. And hot on his trail is a relentless enemy who won’t stop until blood is spilled. No matter where…or when…Cable runs. Brought to you by the dynamic team of Duane Swierczysnki (MOON KNIGHT ANNUAL) and Ariel Olivetti (PUNISHER WAR JOURNAL).
Vol 3: June 2017
WALK SOFTLY…AND CARRY A BIG GUN! CABLE sees the mighty mutant return on a brand-new mission…with all of time in the balance! When Cable picks up the trail of a threat in the timestream, he sets off on a high-speed, history-spanning chase to save reality as we know it. From prehistory to modern day, whether it’s a six-gun duel at high noon or a high-tech sword fight in an ancient land, Cable is the only man who can keep history from unraveling!
Vol 4: March 11 2020
THE DAWN OF REBELLION! Cable was a grizzled old veteran of the wars to save the future… and he will be again. But for now, he’s a young mutant living in paradise leading a life of adventure! Nathan Summers, son of two of the most powerful mutants on Krakoa, has a destiny leading the youth of mutantkind in rebellion… so why not start now? Gerry Duggan (MARAUDERS, DEADPOOL) and Phil Noto (STAR WARS, POE DAMERON) bring us young Cable as we’ve never seen him before!