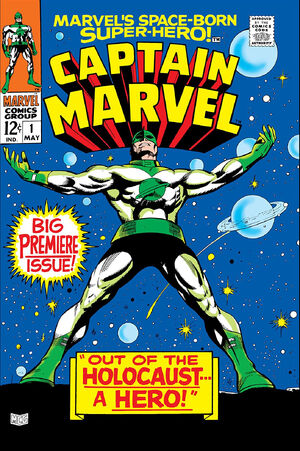 Vol 1: May 1968 – May 1979
A Kree Sentry heads for the nuclear warheads at The Cape missile base. Captain Mar-Vell announces his Kree military rank but Sentry #459 doesn’t stand down as it is programmed to destroy anything that blocks its mission. Mar-Vell blasts the Sentry with his Uni-Beam and the giant retaliates. Mar-Vell escapes using his jet belt but doesn’t fly too far in case the android turns its attention to nearby troops. A soldier overhears the Man of Kree call himself Captain “Marvel” and thus it becomes his heroic name. Mar-Vell increases the intensity of his Uni-Beam and the blast makes the Sentry’s outer shell break apart…
Vol 2: November 1989 – February 1994
Following her departure from the Avengers due to the loss of her powers, Monica decides to join the marines. It is here, as their captain, that she encounters the villain Powderkeg.
During their scuffle, it is revealed he is working for a South American crime lord who has also enlisted the aid of Moonstone.
As he powers begin to re-manifest themselves as variations on what she’s used to, it becomes both a race against time and a re-learning of her powers.
Vol 3: December 1995 – May 1996
This is a short-lived ongoing series from 1995 starring Captain Marvel’s son Genis-Vell written by Fabian Nicieza with art by Ed Benes. Due to lackluster sales it was cancelled at #6. The series was cancelled in such a rush that multiple plot threads were left dangling completely. One of these plots involved Grandmaster and Thanos who were to feature in #7 playing a game of poker with the titular character.
The character’s next chronological appearance is in Avengers Unplugged #5 and then Warlock. He would then go on to star in Avengers Forever which revamped the character and led to another more successful solo series being launched in 2000. Although most of the plot threads were never addressed, let alone resolved, there is some small amount of resolution to be found in Captain Marvel #14 which was a fill-in issue written by this series’ writer Fabian Nicieza.
Vol 4: November 1999 – October 2002
He is the son of Mar-Vell, once the greatest warrior the galaxy had ever known. Spawned in a test tube and prematurely aged to maturity, Genis now struggles to fill the boots of his late father–the boots of Captain Marvel. Therein lies the problem. For Genis has inherited his father’s greatest gift, the ability of Cosmic Awareness, a oneness with the universe that allows him to know what will happen, what may happen, and what should happen to every living thing in the universe. You might think such knowledge would drive a person mad…
Vol 5: November 2002 – September 2004
In the first issue of the relaunch, Genis travels the galaxy experimenting with his cosmic awareness and finding there are too many situations needing his assistance going on at once to fathom. The decisions he makes and their ramifications, as well as what happens due to the situations he decides he can’t get to in time and allows to occur end up driving him insane; stranding Rick Jones in the negative zone.
Vol 6: January 2008 – June 2008
From the pages of CIVIL WAR comes the tale of a man out of time! An accident in the Negative Zone propels Captain Marvel from the past to the present day. Now he must come to terms not only with his own impending death, but with the way the world has changed in the time he has been gone. Brian Reed (NEW AVENGERS: ILLUMINATI; MS. MARVEL) and Lee Weeks (DAREDEVIL; SPIDER-MAN: DEATH AND DESTINY) bring you the mini–series that returns one of Marvel’s greatest heroes back where he belongs.
Vol 7: September 2012 – January 2014
She’s back! The “Mightiest” of Earth’s Mightiest Heroes! Ace pilot. Legendary Avenger. 100% pure bad-a$$. Carol Danvers has a new name, a new mission… and all the power she needs to make her life a living hell. Guest starring Captain America.
Vol 8: May 2014 – July 2015
Hero! Pilot! Avenger! Captain Marvel, Earth’s Mightiest Hero with death-defying powers and an attitude to match, is back and launching headfirst into an all-new ongoing series! As Captain Marvel, a.k.a. Carol Danvers, comes to a crossroads with a new life and new romance, she makes a dramatic decision that will alter the course of her life and the entire Marvel Universe in the months to come. It’s time to go HIGHER, FURTHER, FASTER and more in the most super-powered comic around!
Vol 9: March 2016
Face front, true believers! The Captain has made her return and oh, how mighty it is. It’s a bold new frontier for Carol Danvers as she soars to new heights in her greatest mission yet–leader of the all-new Alpha Flight space program. Yup, Alpha Flight. As earth’s first line of defense, Carol and her team aim to protect the planet from extraterrestrial threats. But can Carol be a soldier and a diplomat? Especially when an unknown enemy emerges that Carol can’t quite punch. The superstar team behind Marvel’s Agent Carter television series, Tara Butters and Michele Fazekas, make their comics debut alongside the awesomely-talented Kris Anka.
Vol 10: March 2019
ALL THE STARS ALIGN AS KELLY THOMPSON AND CARMEN CARNERO TAKE ON MARVEL’S PREMIER FEMALE SUPER HERO! As Captain Marvel, Carol Danvers has spent months in space protecting Earth from alien threats big and small, but now it’s time for Earth’s mightiest hero to come home. New York City has never looked so good. But every re-entry comes with the unexpected, and Carol is about to hit a whole lot of unexpected. It’s a fresh start and an oversized, star-studded welcome home for a hero who’s been punching the glass ceiling since the 1970s — and just in time for the first female-led film from Marvel Studios! The next 50 years of Captain Marvel starts here!