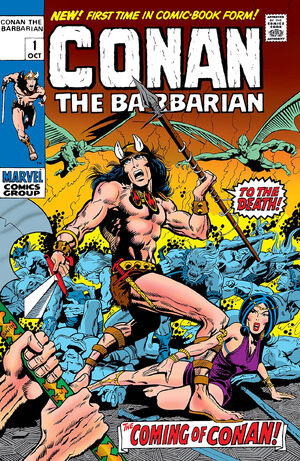 Vol 1: October 1970 – December 1993
We start in summer in Vanaheim. A battle is being waged by raiding Aesirs with the defending Vanirs and of course Conan is in the middle of this too. He is in his youth at this time and he sees an Aesir being attacked and here he decides that it is not to do with him because he has earned his gold. But why let 3 jackals live? His response, By Crom they should not and by crom they shall not. You know what happens next. He takes a swipe with his sword and kills 2 helping Olav of Aesgaard. The Vanirs flee leaving Conan and his party some time to heal wounds and bury the dead ones….
Vol 2: July 1997 – October 1997
Three issues mini-series.
Vol 3: March 2019
BY CROM, THE GREATEST SWORD-AND-SORCERY HERO RETURNS TO MARVEL! From an age undreamed…hither came Conan the Cimmerian, black-haired, sullen-eyed, sword in hand, a thief, a reaver, a slayer, with gigantic melancholies and gigantic mirth, to tread the jeweled thrones of the Earth under his sandaled feet… Robert E. Howard’s creation returns to comics, in an epic tale as only MARVEL could bring you! Conan’s travels have brought him to the far reaches of the unkown, from his birthplace in Cimmeria to the kingdom of Aquilonia and all in between. As his fighting prowess allows him to carve his way through life, so too does it attract the forces of death! The all-new ages-spanning saga begins here, by writer Jason Aaron (THE MIGHTY THOR, STAR WARS) and artist Mahmud Asrar (UNCANNY X-MEN, ALL-NEW, ALL-DIFFERENT AVENGERS), as Conan’s destiny is forever changed!