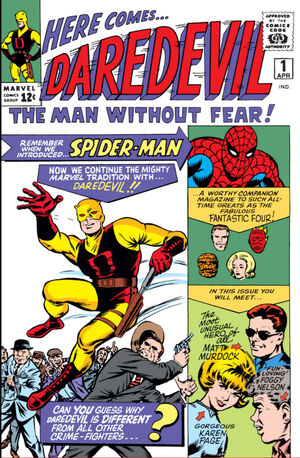 Vol 1: April 1964 – February 2011
He dwells in eternal night- but the blackness is filled with sounds and scents other men cannot perceive Though attorney MATT MURDOCK is blind, his other senses function with superhuman sharpness- his radar sense guides him over every obstacle! He stalks the streets by night, a red-garbed foe of evil! Stan Lee presents… Daredevil, The Man Without Fear! Vol 2: November 1998 – August 2009
Matt Murdock, whilst dealing with his own personel problems, meets a young woman who knows he’s Daredevil, is a virgin and has a baby. She was saved by Daredevil earlier that day from some thugs, and she claims that angels told her his secret identity, the child is Christ reborn and that he must protect the child. She then gives him the baby and disappears.
After issue #119, the series reverts to its original numbering of volume 1 with issue #500, summarizing two volumes in one. The volume ends at issue #512. Vol 3: July 2011 – April 2014
THIS SUMMER, THE DEVIL IS REBORN. RENEWED. RESURRECTED. With new enemies, new friends…and that same old ‘grinnin’ in the face of hell’ attitude, The Man Without Fear is back in a double-sized first issue and leading with his face! Mark Waid (AMAZING SPIDER-MAN, Irredeemable, RUSE) joins neo-legendary artists Paolo Rivera and Marcos Martin for a new spin on Daredevil that will leave you gasping for air. Having turned his world upside over the past several years, Matt Murdock realizes that justice may not be blind to his past and villains may not be the only ones looking for answers. Bring it on. If Matt Murdock could see what he was doing… he’d be terrified. Then Daredevil realizes he was being followed by an old friend. Vol 4: May 2014 – November 2015
BECAUSE YOU DEMANDED IT! Join Marvel’s fearless hero as he begins his most awe-inspiring adventure yet in the sunny city of San Francisco! Gifted with an imperceptible radar sense and a passion for justice, blind lawyer Matt Murdock—a.k.a. DAREDEVIL—protects the Golden City’s streets from all manner of evil. But big changes are in store for Matt Murdock as old haunts and familiar faces rise to give the devil his due. Hold on tight, because here comes Daredevil…the Man Without Fear! Vol 5: February 2016
Charles Soule and Ron Garney bring Daredevil back to New York City with a new job and secret identity. Vol 6: April 2019
KNOW FEAR. Featuring action-packed extras including a Cover Gallery, Script, Inked And Color Pages and Character Designs! Vol 7: June 01, 2022
AFTER THE REIGN COMES THE DAWN! In the wake of Wilson Fisk’s violent and visceral last act, it’s a new era for New York and the Man Without Fear! With a groundbreaking creative team returning to usher in an all-new chapter, Matt Murdock has no choice but to leave behind everything he’s ever known, and ELEKTRA is the last vestige of his former life. Everything Matt Murdock thought it meant to be DAREDEVIL is about to change, including the challenges he will have to face in the cowl!