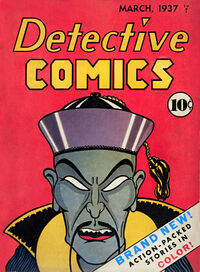 Vol 1: March 1937
Detective Comics was an anthology comic featuring detective characters (both superhero and civilian). The longest-lasting character in Detective Comics was Batman: from the time of his debut (#27, May 1939), the Caped Crusader was almost always the star of the cover and lead story.
Detective Comics has remained in publication longer than any other DC Comics title, and indeed, the very name DC was taken from its initials. However, since Action Comics was published weekly for a short time in the 1980s, and Detective was bi-monthly for a period in the 1970’s, Action has a higher issue count. Nonetheless, in March 2019, Detective became only the third American comic book in history – after Action and the Four Color series of the 1930s-60s by Dell Comics – to publish a 1,000th issue. In 2011, as part of The New 52 reboot, Detective’s numbering was reset to #1 and a “Volume 2” launched. However, in 2016 the legacy numbering was restored, allowing the comic to reach the milestone.
Vol 2: November 2011 – 2016
Detective Comics (Volume 2) is one of The New 52 ongoing series to be published after Flashpoint.
After 52 issues, the series is ended as part of DC Rebirth. Detective Comics (Volume 1) resumed publication with issue #934 (August, 2016), the number Volume 1 would have been at had it been in continuous publication.