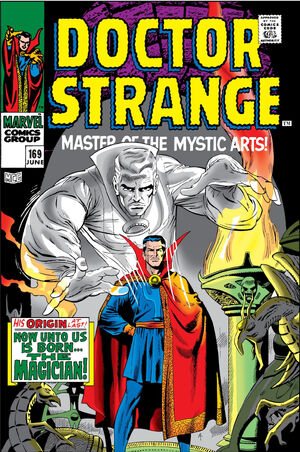 Vol 1: June 1968 – November 1969
Doctor Strange stories continued from Strange Tales. 1st Doctor Strange in his own title. Cover art by Dan Adkins. The Coming of… Dr. Strange, script by Roy Thomas, art by Dan Adkins; Origin of Dr. Strange retold; Stephen Strange seeks out the Ancient One in Himalayas in hope of a cure for his damaged nerves; He discovers that Baron Mordo, a pupil of the Ancient One, is plotting to kill his teacher; Strange warns the Ancient One and then asks to study the mystic arts. Vol 2: June 1974 – February 1987
First appearance of the Silver Daggar in the beginning of a classic Dr. Strange storyline, Through an Orb Darkly!, script by Steve Englehart (co-plot, script) and Frank Brunner (co-plot), pencils by Frank Brunner, inks by Dick Giordano; Silver Dagger infiltrates the Sanctum Sanctorum, throws silver dagger into Strange’s back, and takes the Eye of Agamotto amulet and Clea; Strange is pulled into necromantic Orb of Agamotto and cryptic hookah-smoking caterpillar Vol 3: February 1999 – May 1999
The good Doctor stars in his own limited series, some years after his own ongoing series ended Vol 4: December 2015
Who do you call when things are coming out of your dreams and trying to kill you? Or when your daughter is cursing in Latin and walking like a spider? Or when your dog keeps screaming at you to strangle your neighbors? of course. He’s the only person standing between us and the forces of darkness, but has he been paying his tab? Every act of magic has a cost and Jason Aaron (THOR, ORIGINAL SIN) and Chris Bachalo (UNCANNY X-MEN) are going to put Stephen Strange through hell to even the scales. Vol 5: August 2018
SORCERER SUPREME…OF THE GALAXY! The Eye of Agamotto is closed! Doctor Stephen Strange has lost his connection to the Earth’s arcane power, and he can’t wait to recover while nightmares press against the seams of our reality. Tony Stark offers a 21st-century solution: When astral travel fails, try astronautical travel. Enter Doctor Strange: Space-Explorer Supreme! New spells, allies and enemies – new and old – await Strange beyond the stars, along with corners and secrets of the Marvel Universe seen here for the first time! Space is endless, but time is short. After years of threats, Stephen’s bill for magic use is coming due – who will come to collect?!