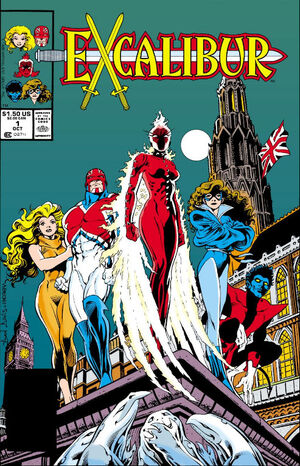 Vol 1: 1988
The world believes the X-Men have fallen, but this is only the beginning! Kitty Pryde, Rachel Summers, and Nightcrawler form Excalibur, premiere super hero team of the United Kingdom! Captain Britain leads the pack with shape-shifting lover Meggan. Will the team survive the coming days of terror?
Vol 2: February 2001 – May 2001
A four part limited series detailing Captain Britain’s rise to become king of the extra-dimensional realm of Otherworld.
Vol 3: July 2004 – July 2005
In Genosha, Xavier thinks back about the destruction that his twin sister, Cassandra Nova, caused. Resolving his emotions, Xavier opens a secret compartment on the bottom of the coffin near him. He removes an outfit that seems more soldier-like and a handful of electronic devices, including weapons. Trying to pick the coffin off the ground, he is embarrassingly thrown to the ground by his own momentum.
Vol 4: October 30, 2019
The Otherworld is rocked by war! It is a new era for mutantkind as a new Captain Britain holds the amulet, fighting for the Kingdom of Avalon with her Excalibur at her side – Rogue, Gambit, Rictor, Jubilee…and Apocalypse.