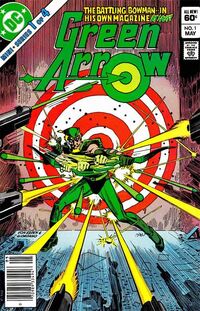 Vol 1: May 1983 – August 1983
Oliver Queen fights for justice, by day as a columnist for the Daily Star, by night as the Green Arrow. Two street toughs hold up a grocery store clerk. Before they can murder him, they are stopped by the Green Arrow. The Green Arrow activates an alarm, to signal for the police, before departing. At his home, the Green Arrow, as Queen, is accosted by Deidra Wagner, a lawyer. Queen is given a summons to appear at the reading of Abigail Horton’s last will and testament.
Vol 2: February 1988 – November 1998
The story opens with a group of young adults socializing in a wooded area. They are accosted by a group of bandits, but before they have a chance to commit their act of robbery, the group is interrupted by Green Arrow. A fight ensues, leaving the robbers on the ground and Ollie sarcastically thanking them for the exercise, saying “I was beginning to think I’d have to join a health club.”
Vol 3: April 2001 – August 2007
When readers last saw Oliver Queen, he was seconds away from meeting his doom as he clutched a ticking bomb aboard a plummeting airplane. Until now, only Superman knew what really happened on that fateful day. But in the new Green Arrow series, readers finally get a chance to uncover the truth for themselves. Many characters populating the DC Universe are asking questions and demanding answers, including Queen’s ex-lover Black Canary, his ex-partner Arsenal, and the son he hardly knew, Connor Hawke, who followed in his father’s footsteps and temporarily became Green Arrow after Queen’s “death.” A certain Dark Knight from Gotham City has some questions of his own and he may not like the answers.
Vol 4: August 2010 – October 2011
This new series follows after Green Arrow/ Black Canary and the events in Justice League: Cry for Justice and Justice League: Rise and Fall. With Star City still decimated by Prometheus, a new forest is brought to life in the center of all the destruction by the White Lantern Ring. Green Arrow has been banished after murdering Prometheus and now lives inside this forest acting as a modern day Robin Hood. Meanwhile, Queen Industries has been bought by someone calling herself ‘Queen’ who promises to rebuild the city and starts enacting their own police force.
Vol 5: November 2011
Green Arrow is on the hunt. Driven by inner demons, Ollie Queen travels the world and brings outlaws to justice… by breaking every law.
Now, armed with cutting-edge weaponry and illegally gained intel (courtesy of his team at QCore), Green Arrow is shooting first and asking questions later.
Vol 6: August 2016
As Oliver struggles with how he can fight “the man” when his huge fortune makes him the man, he and Black Canary uncover a deadly new threat to Seattle that cuts the Archer to the bone.
THEY SAID IT: “My touchstones are [former GA writers] Dennis O’Neil and Mike Grell, while trying to make the series my own,” says writer Benjamin Percy. “Green Arrow will be a politically and culturally relevant series. Expect stories that aim a broadhead into the zeitgeist, that are ripped from the headlines.”