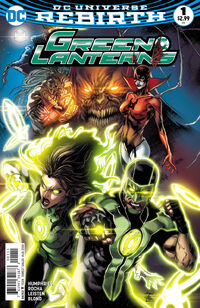 Vol 1: June 15 2016
Green Lanterns (Volume 1) is a 57 issue ongoing comic book series published by DC Comics from 2016 to 2018. Begun as part of the DC Rebirth initiative, it replaced Green Lantern (Volume 5) and starred Green Lanterns of Earth Simon Baz and Jessica Cruz. Published twice monthly, the book was written by Sam Humphries for its first 32 issues and Tim Seeley for the next fifteen.
After a short, two-issue story by Sam Humphries (and the cancellation of sister title Hal Jordan and the Green Lantern Corps (Volume 1)), the book was taken over by writer Dan Jurgens, who expanded the roster to include other members of the Green Lantern Corps and closed out the title with an eight issue arc. Penciling duties were handled by a rotating team of writers during the book’s biweekly phase, including Carlo Barberi, Ed Benes, Ronan Cliquet, Eduardo Pansica, and Robson Rocha, with Mike Perkins taking over as sole artist during Jurgens’ tenure as writer.
It was cancelled in late 2018 and replaced with Grant Morrison and Liam Sharp’s The Green Lantern (Volume 1).