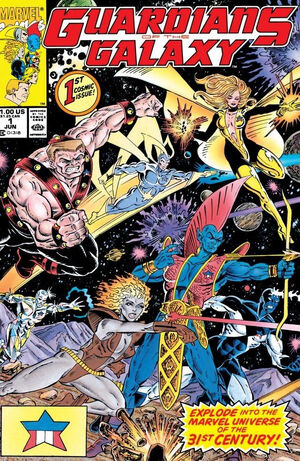 Guardians of the Galaxy

Vol 1: June 1990 – July 1995
In the First issue of the series we find the team, Nikki, Vance, Charlie, Yondu, Martinex and Starhawk, engaged in battle with various robotic weapons. We learn they are on the planet Courg and that the technology was put there by the Stark a race who worships Tony Stark as their god. We get a breif recap of the GotG past and after a brief battle with Taserface a scout for the Stark they encounter an entire Stark war squad!
Vol 2: July 2008 – June 2010
Launching out of Annihilation: Conquest, Marvel’s sci-fi heroes unite to protect the cosmos! Back-to-back Annihilation wars have weakened the boundaries of our universe. Dark gods and monsters are seeping through the cracks, reigning horror upon those still reeling from the recent calamities. In the face of terror, who stands to defend a desperate universe? Star-Lord and his squad of butt-kickers – the modern day Guardians of the Galaxy! You’ve heard that Annihilation: Conquest rocks – the guy at the comic shop keeps telling you to try NOVA – well, now’s your chance to experience the glory that writers Dan Abnett & Andy Lanning and artist Paul Pelletier can unleash! All this…plus a wise-cracking raccoon and a telepathic dog! C’mon, people, time to lock and load!
Vol 3: April 2013 – July 2015
The Guardians of the Galaxy is a group of heroes who opposed the Phalanx conquest of the Kree system (and many who had opposed Annihilus’ incursion into their universe), and banded together in an attempt to prevent any further catastrophes from ever occurring.
On the recommendation of ally Nova, the group established a base of operations at the space station Knowhere, which conveniently possessed a teleportation system with near-universal range. An intelligent, super-powered dog called Cosmo acted as Knowhere’s chief of security and worked closely with the new team during their first missions.
Vol 4: December 2015
has abandoned the Guardians and his role as Star-Lord to be Emperor of the Spartax. Rocket didn’t wait a single minute to take the reins and become team leader of Drax, Venom, Groot, Kitty Pryde (A.K.A. Star-Lady ?!?!) and new Guardian BEN GRIMM, the everloving THING!
Vol 5: January 23 2019
WHO WILL STAND? The universe is on fire. Hundreds of worlds are at war. Never has there been such hatred and division across the cosmos. And in spite of all this, Thanos of Titan is still dead…or is he? Now, more than ever, the cosmos need the Guardians of the Galaxy…but in the aftermath of the Infinity Wars, who is left to answer the call? Featuring every cosmic super hero in the known universe by the THANOS WINS creative team of Donny Cates and Geoff Shaw!
Vol 6: 2020
Once, they were a team of misfits. Now they’re a family, and they’ve earned their peace. But the universe is not a peaceful place — and it’s only getting worse. The Great Empires are in turmoil. The rule of law is dead. And amidst the chaos, the Gods of Olympus have returned — harbingers of a new age of war, reborn to burn their mark on the stars themselves. Someone has to guard the galaxy – but who will accept the mission? And will they survive it? Al Ewing (IMMORTAL HULK) and Juann Cabal (FRIENDLY NEIGHBORHOOD SPIDER-MAN) bring you in on the ground floor of a whole Marvel Universe of action and suspense!