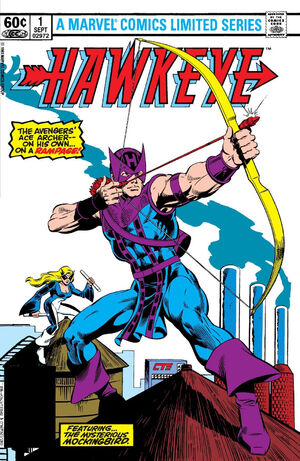 Vol 1: September 1983 – December 1983
Enthralled in his relationship, Clint opens up to new girlfriend Sheila Danning about his super hero origin. The date ends abruptly when Hawkeye investigates a break-in at Cross Technologies…and the intruder’s none other than Mockingbird! Is Cross Tech involved in illegal affairs that are destroying the environment? Mockingbird seems to think so, and she’ll stop at nothing to convince Hawkeye!
Vol 2: January 1994
Mini-series starring Hawkeye that occurs after the death of Mockingbird.
Vol 3: December 2003 – August 2004
From carnival roustabout to petty thief to troublemaking hero, one thing about ex-Avenger and Thunderbolt Clint Barton has never changed: he’s a sucker for a lost cause. His travels in search of the world’s best chili take Hawkeye out of spandex and into the real world problems of real world losers. Call HAWKEYE the ongoing series, ”hard-boiled fiction with an adrenaline kick” – Elmore Leonard meets John Woo! Exotic locations, offbeat characters, sleazy morals and sleazier motives … and a hero who’s not afraid to get his hands dirty…
Vol 4: October 2012 – September 2015
The second Hawkeye ongoing series by Matt Fraction and David Aja, the creative team behind Immortal Iron Fist. The legendary superhero during his time when he is NOT being an Avenger. Clint Barton becomes a landlord and a pet owner, but in the process makes some deadly enemies. Plus, can he balance a relationship and a friendship with a certain red-headed Russian spy, ex-wife, and flirtatiousfemme fatale? The series had one Hawkeye Annual. This series lasted 22 issues, after which it was continued into All-New Hawkeye with a new team.
Vol 5: December 14 2016
Remember Hawkeye? No not that Hawkeye, our favorite Hawkeye, the chick who puts the hawk in Hawkeye, the butt-kicking hero who had to save the other Hawkeye’s butt all the time. Yup, you know her, it’s the dazzling Kate Bishop making her solo comics debut! Kate is heading west and returning to Los Angeles, with her bow and arrow and P.I. badge in tow. There are crimes to solve and she’s the best archer to handle ‘em! The City of Angels has a new guardian angel. The talented duo of Kelly Thompson (A-Force, Jem) and Leonardo Romero (Squadron Supreme, Doctor Strange) bring you a Kate Bishop like you’ve never seen her before, in a brand-new ongoing series that really hits the mark!