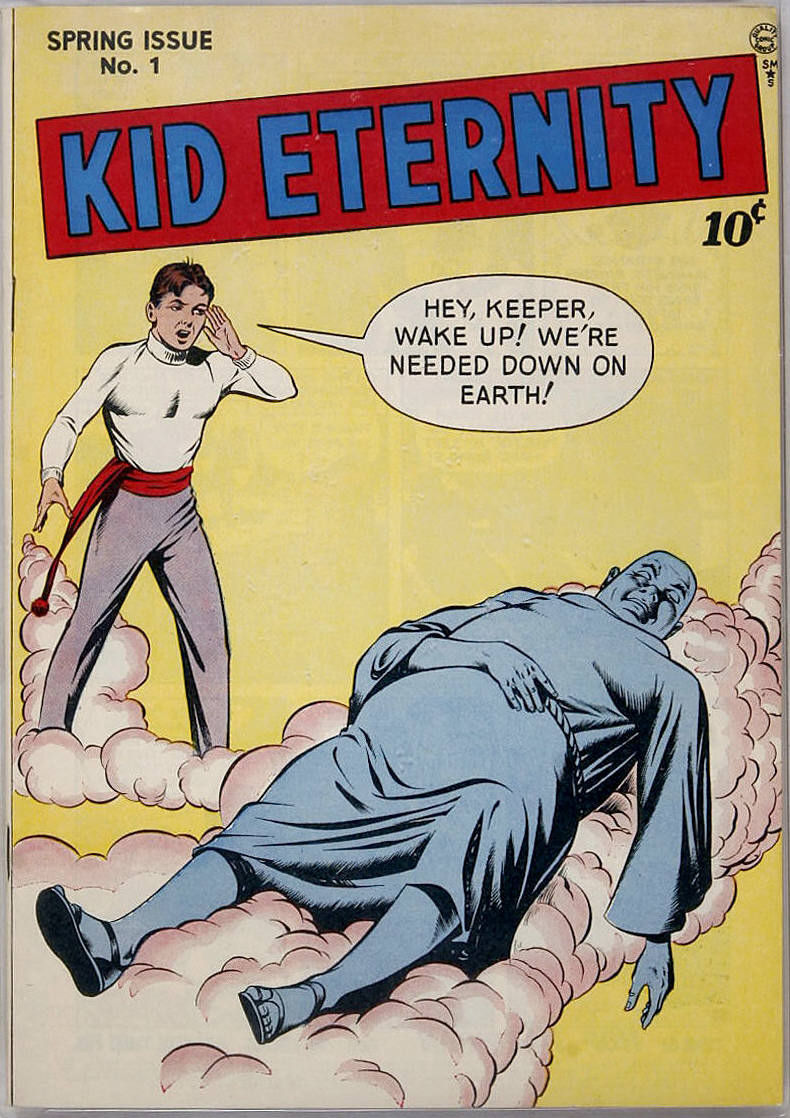 Vol 1: Spring 1946 – November 1949
Kid vs. Egyptian monsters! Meets the Amazons! Faces Kali, the prince of evil!
Snap Shotz in a humorous story, in what he he shows gangsters what`s what!
Vol 2: April 1991 – November 1991
He’s neither dead nor alive. He’s KID ETERNITY, a teenager endowed with supernatural powers and the ability to bring back the dead – a gift from the powers above for being taken by death ahead of his time. Now the free-spirited Kid Eternity is back as an agent of Chaos, in a world that’s just a bit too ordered for his taste. The Kid must free his partner, Mr. Keeper, from indentured servitude in Hell before he can get on with his mission of undermining the forces of Order. Kid Eternity uses chaos magic to elevate humanity’s existence, but this path to good intentions is paved with demons, death and madness…especially when his way is blocked by a sleazy evangelist and a stand-up comedian. Before this nightmarish excursion into the netherworld has ended, everyone will be swept away in a rush of insanity that sheds new light on good and evil, life and death.
Vol 3: May 1993 – September 1994
Ever wonder who’s calling the shots? Ever wonder if those in control are reviewing all the resumes? If not, consider the case of Kid Eternity. Everyone knows someone like the Kid-the dude who seems just too cool to live. In his case, though, it’s true. Kid Eternity is dead, though he tries not to let that cramp his style. In a lot of ways, he’s a pretty typical teenager-more interested in the world in his head than in the job at hand, which is to help humanity raise its consciousness and climb the next rung of evolution’s ladder. Okay, so the Kid can call on anyone in all history to aid him in his quest, but there we go assuming the Kid’s going to notice it when he needs help. The Kid has this small denial problem. When your whole (after)life is just one damned thing after another, you tend to be pretty jaded, and things have to get awfully weird before the Kid gets moving.