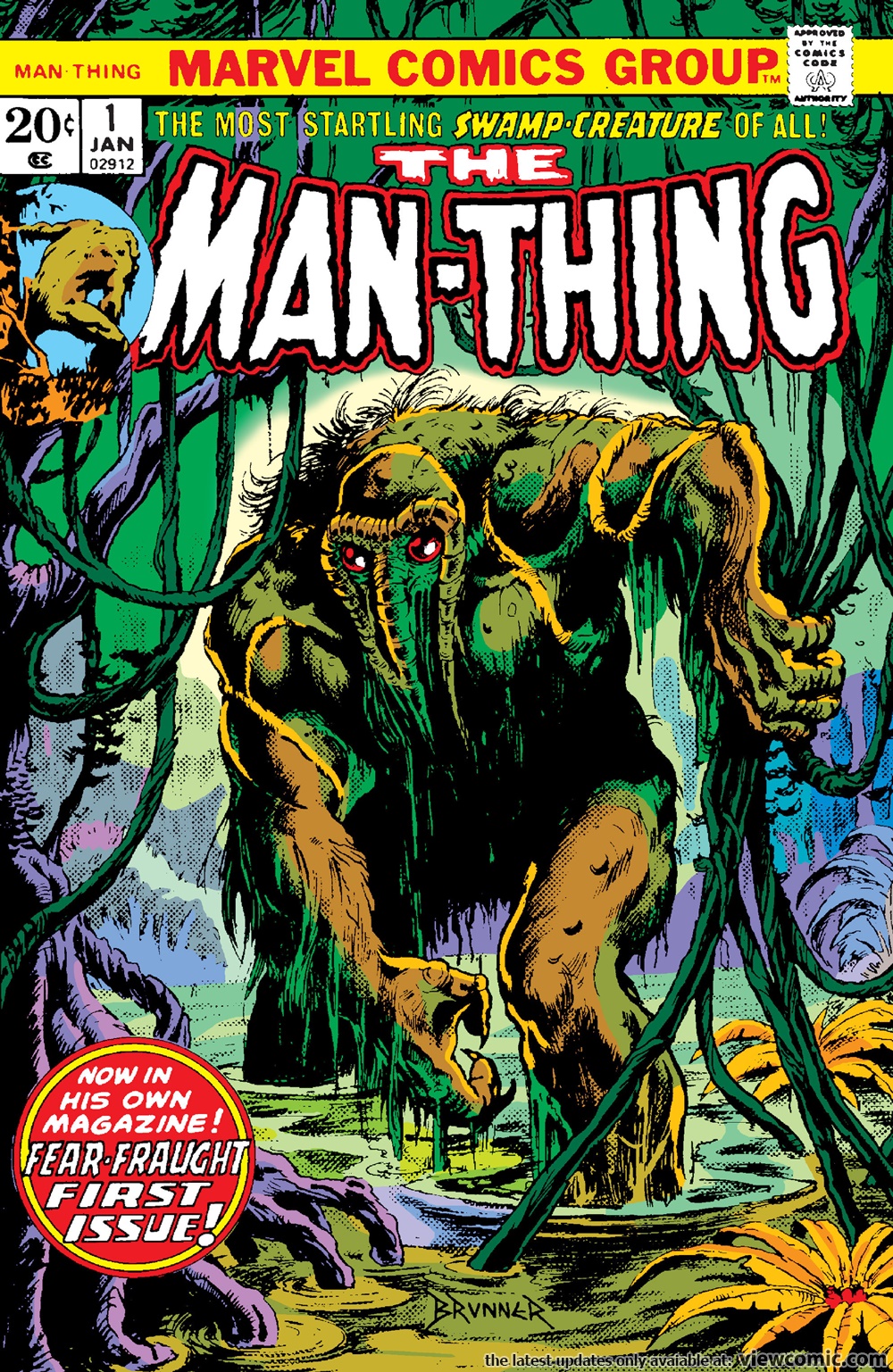 Vol 1: January 1974 – October 1975
While guarding the Nexus of All Realties, Marvel’s resident muck-man encounters an overeager duck from Duckworld, and Korrek the Barbarian! Will this unlikely trio be able to save the time stream from the likes of Thog the Nether-Spawn?
Vol 2: November 1979 – July 1981
The government recruits Dr. Oheimer to capture the Man-Thing and restore its intelligence, so they can try to extract the Super Soldier serum recipe from his mind. As told in a flashback, Ted Sallis had recreated that serum and injected himself with it while trying to flee from thugs. Crashing into the swamp..the mucky waters interacted with the serum and turned him into the mindless Man-Thing. Dr. Oheimer does indeed capture Man-Thing and is making progress in restoring his intelligence until…real government agents find out about the plan to recreate the serum and send soldiers in to rescue Dr. Oheimer from the fake government agents. The soldiers think the Man-Thing is a monster and accidentally shoot Dr. Oheimer, the only person who knew of Man-Thing’s submersed intelligence. Man-Thing is enraged, attacks the soldiers and returns to the swamp.
Vol 3: December 1997 – July 1998
…
Vol 4: September 2004 – November 2004
What evil lurks in the brackish waters of the swamp? It’s the return of one of Marvel’s all-time favorite horror characters: Man-Thing! Just in time for the upcoming theatrical film release by Lion’s Gate Films, this three-issue movie “prequel” is written by Hans Rodionoff, screenwriter for the Man-Thing film, and drawn by “master of the macabre” Kyle Hotz (The Hood). Set in the Bywater Swamp from the Man-Thing film, this self- contained story will enhance the movie-going experience with BRAND-NEW content we found lurking in the shadows of the bayou!
Vol 5: March 8 2017
Beloved writer R.L. STINE (Goosebumps, Fear Street) brings his special brand of horror to MAN-THING! After working for years, MAN-THING has regained his ability to speak and has taken Hollywood by storm…But when an ancient and mysterious danger threatens the swamp, Man-Thing is going to have to choose between his new life and celebrity, and the world he used to call home…PLUS! A bone chilling new horror story, written by the master himself, R.L. STINE, and illustrated by the incomparable Daniel Warren Johnson!