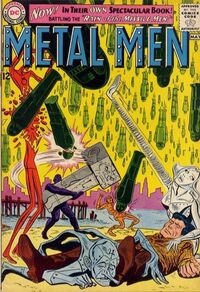 Vol 1: Apr/May 1963 – Feb/Mar 1978
Doctor William Magnus, and his fantastic Metal Men, pose for “Picture World” magazine. The heat of the midday sun causes Mercury to elongate, stretching high into the sky. Hurriedly, Lead molds himself into a barrier, to protect Mercury from the heat of the sun. Platinum’s amorous advances towards Magnus, prompts the famed inventor to consider donating her to a science museum. Platinum reminds Magnus of how that turned out the first time. When the museum staff had arrived to collect Platinum, she attacked them. Magnus had to order her to stand down, and accompany the staff quietly. In the museum, Platinum had desperately reached out to Magnus, pleading with her creator not to leave her.
Sensing the Metal Men’s depression over Platinum’s absence, Magnus had suggested taking the Jetaway out for a ride. Soaring over the city, Magnus spied meteorites plummeting into a giant gas storage tank. The meteorites’ impact caused a massive explosion. Magnus, and the Metal Men, were pitched out of the Jetaway. Holding onto Mercury, Magnus was carried back up into the Jetaway. Tin attempted to seal the burning gas tank. The gas, though, burned hotter than Tin’s melting point, reducing the humble Metal Man to slag. Lead also tried to seal the blazing container, and met the same fate. Iron and Gold were able to seal the tank, but both suffered horrendous damage.
Vol 2: October 1993 – January 1994
4-Issue mini-series from the then Superman creative team of Mike Carlin, Dan Jurgens and Brett Breeding.
The story features Will Magnus and his Metal Men as they come into contact with a strange meteorite that is also desired by another, and will stop at nothing to get to it.
The plotlines continues story threads form their time on Superman.
Vol 3: October 2007 – July 2008
Doc Magnus’s creations are ready to take on all-new threats and some old, reimagined ones: Chemo, Doctor Yes, B.O.L.T.S., The Balloonatic and his Orphan Army, as well as the Robot Renegades led by an old Manhunter Robot!
But the greatest threat lies in Le Cabinet Noir and its bid to control the natural order using dangerous lieutenants like the Nameless, an armored being that feeds off the blood of the innocent and controls the Gogoloth, giant stone Golems made of Granite, Bizmuth, Onyx and Lime.
Vol 4: October 16 2019
The Metal Men are back! And back and back and back again, as we take a deep look into Doc Magnus’ lab as he experiments with what it means to be sentient. Meanwhile, a mysterious liquid Nth metal has appeared in the science site at Challengers Mountain that appears to have come through from the Dark Multiverse…