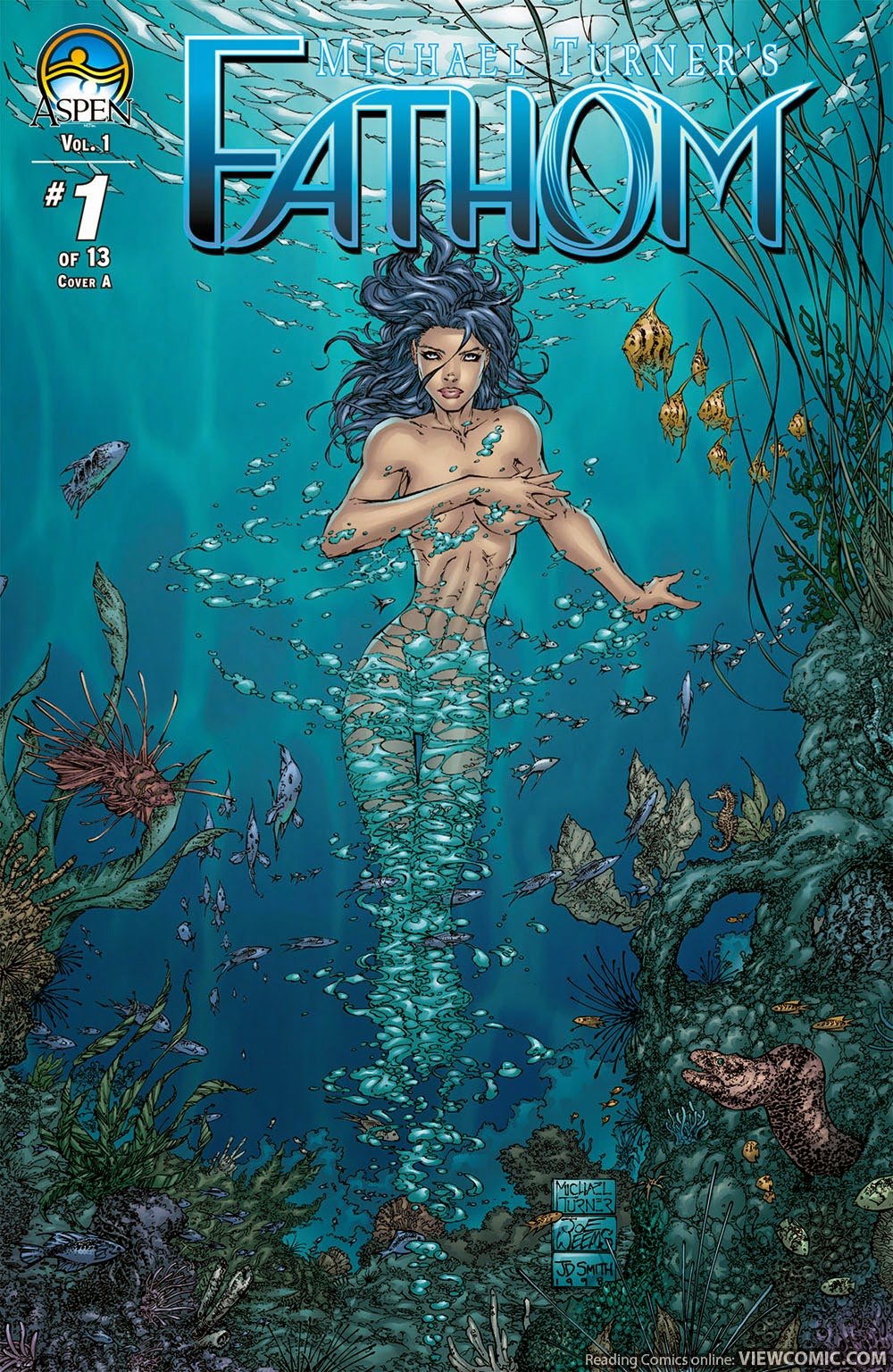 Vol 1: 2011
…
Vol 2: 2011
…
Vol 3: 2011
…
Vol 4: June 2011 – May 2013
Michael Turner’s Fathom makes its return for the sensational fourth volume! Aspen Matthews is back once again! But now, Aspen must deal with the global ramifications of the Blue and Black’s exposure to the rest of the world. However, this is an Aspen that is through being manipulated by the outside forces surrounding her life. It’s a brave new world for her and the rest of the cast of FATHOM, as they must attempt to piece together the fragments of a world shattered by the knowledge of their existence. With FATHOM’s long awaited return at hand, some new creators and several familiar names are along for the ride! Artist extraordinaire Alex Konat of Mindfield fame is joined by acclaimed writer Scott Lobdell, a newcomer to the world of FATHOM, but ready to make his mark on the series unlike anything you’ve ever seen before. Colorist Beth Sotelo also joins the FATHOM family and brings her lush color pallet to the world of the Blue! For the legions of FATHOM fans who have been waiting to see Aspen in her element, taking control of her life, now is the time to jump on in-the water’s just fine!
Vol 5: 2013
…
Vol 6: February 2017
Dive back into the world of MICHAEL TURNER’S FATHOM in this great jumping-on point for new readers!
ASPEN MATTHEW’S role in the brand new ASPEN UNIVERSE, spawning out of last summer’s mega-event, Aspen Universe: Revelations, is larger than ever! Now, the preeminent heroine must navigate the treacherous divide between the humans and her ancestral people of The Blue—as well as the surprises in store for both races in this all-new FATHOM landscape where anything is possible!
Nearly two decades of the best-selling series created by superstar artist, the late Michael Turner, have culminated in this all-new FATHOM adventure by Aspen’s newest up-and-coming talents! Please join newcomers, writer Blake Northcott and artist Marco Renna, as they bring readers back under the surface into the world of The Blue, and everything you loved about FATHOM!
Vol 7: June 20 2018
1998’s Best-Selling Title of the Year Celebrates 20 Years in 2018! This all-new adventure for Aspen’s preeminent hero sees her attempt to navigate an ever-changing world where The Blue are not only present above the surface—but exploited in new and dangerous ways. When a rival nation to The States decides to take control of the global landscape by tapping into the power of The Blue, Aspen Matthews discovers that a new adversary has risen to challenge the notion that she is the most powerful person on the planet—and humanity may suffer the consequences! Michael Turner and Aspen Comics’ flagship title commemorates its landmark twenty years since its debut in grand fashion! The superstar creative team of Ron Marz (Green Lantern, Witchblade) and Siya Oum (Lola XOXO) are on board to deliver Fathom, and the iconic heroine, Aspen Matthews, to a new generation of readers as well as loyal fans alike!
Vol 8: May 2019
The world below is no longer a secret and everything has led to this…
Aspen Matthews must restore the balance between both Humans and The Blue as once again Fathom’s preeminent villain, Killian, has returned to reclaim what he believes belongs to himself and his people! The stakes have never been higher as this volume returns Aspen’s best-selling franchise for over 20 years to its roots, as Aspen must risk the fate of both worlds in order to stop Fathom’s most dangerous foe!