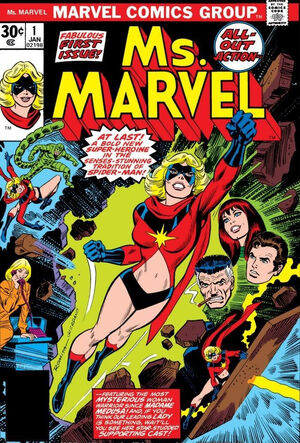 Vol 1: January 1977 – April 1979
It starts off with Ms. Marvel stopping a bunch of crooks, while unknown to all, the Scorpion succeeds in robbing a bank while the other crooks were captured. Later, the scene shifts to J. Jonah Jameson hiring Carol Danvers as the editor of the Woman magazine. Afterwards, Carol meets Peter Parker and Mary Jane, but as she does, the Scorpion takes his stolen money to a lab where he gives it to Professor Kerwin Kormin in exchange for the lab itself, which Kormin is retiring from. Later, Carol Danvers is talking with Mary Jane in her hotel when she suddenly blacks out…
Vol 2: May 2006 – April 2010
All this and an alien invasion that could mean the end of life on Earth, is tucked inside a cover by Eisner Award-nominated Frank Cho!After many years as a super hero, Carol has come to the realization that she should be doing more with her life. She could be more than just another hero, she could be the best of the best.
Vol 3: April 2014 – December 2015
Meet Kamala Khan, an average sixteen-year-old girl from Jersey City that just so happens to become a superhero.Ms. Marvel Issue 1 is a great example of how to introduce a new character. The comic starts out in a deli, where she is enjoying the smells of meet that she is forbidden to eat by her faith, and she hears about a party being thrown at the waterfront later that evening. We learn that Kamala is a Muslim and the daughter of Pakistani immigrants. When she is told that she cannot go to the …
Vol 4: January 2016
The internationally-beloved, butt-kicking, smack-talking, most adorable super hero makes her triumphant return. Look out world, Kamala Khan is back and officially an Avenger! Yup, the dream to end all dreams has happened for Kamala. She’s toe to toe with the best of the best, but will being one of Earth’s mightiest heros be everything she imagined? Is being a celebrity hero as wonderful as Kamala has hoped?