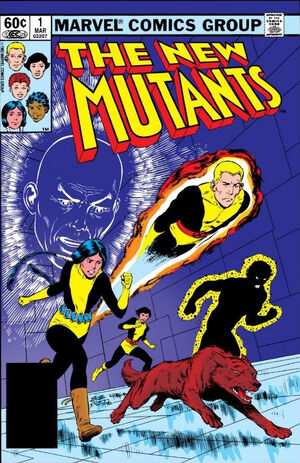 Vol 1: March 1983 – April 1991
After their first adventure in Marvel Graphic Novel #4, the newest generation of mutants takes center stage in their first ongoing series! See Cannonbal, Sunspot, Mirage, Wolfsbane, Magma, Cycpher, Warlock, Karma and Magik in their quest for mastering their mutant-powers and growing up in a world that hates and fears them. The series lasted for 100 issues, after which it was continued in X-Force. Vol 2: July 2003 – June 2004
Sofia Mantega goes to the U.S. from Venezuela to live with the father she never met after the tragic death of her mother. She is largely neglected by her father who is pretty much ashamed of her mutant nature. She is primarily taken care of by her butler, Derek, who is the only person to show any interest in her well-being.
Unable to fit into her new school and completely ignored on her birthday by her father, Sofia destroys one of her father’s supermarkets with an intense tornado. Sofia’s arrest is broadcast in the news, exposing her as a mutant.
Unwilling to bail out his daughter, Sofia remains in jail until Danielle Moonstar (of the New Mutants and X-Force), who after witnessing her arrest on television, offers her a chance to join the Xavier’s Institute of Higher Learning. No longer willing to try hard to please her father, she takes up Danielle’s offer but not before saying goodbye to Derek. Vol 3: July 2009 – December 2012
When their oldest and most powerful foe returns, the original New Mutants must reunite! Cannonball, Sunspot, Magma, Magik and Dani Moonstar race to the rescue of Karma. But Legion has her right where he wants her: locked inside his schizophrenic mind! Vol 4: November 6 2019
THE NEW GENERATION CLAIMS THE DAWN! The classic New Mutants (Sunspot, Wolfsbane, Mirage, Karma, Magik, and Cypher) get together with a few new friends (Chamber, Mondo) for a new mission!