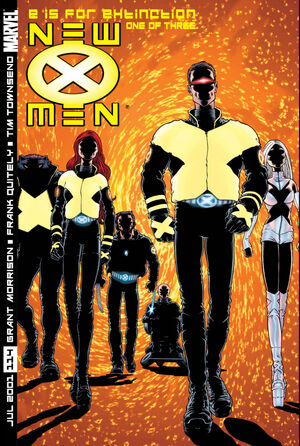 Vol 1: July 2001 – July 2004
Cyclops and Wolverine rescue a mutant (Ugly John) from a Sentinel. Ms. Nova shows Donald Trask how homo sapiens slaughtered the neandertals thirty thousand years ago and then tells him that mutants will do the same to humans within a few generations. Xavier is trying out the new cerebra when a large spike of the mutant genes is spotted in South America. He asks Cyclops and Wolverine to investigate. Xavier hears a voice inside his head that tries to take control of him, but is saved by Jean. Ms. Nova takes Mr. Trask to a Master Mold facility in South America and introduces him to Wild Sentinels.
Vol 2: July 2004 – March 2008
The children at the X-Mansion thought they had it tough when Professor X was running things – but now that Cyclops and Emma Frost have taken over the reins of the school, they’re wishing for the simpler times of yesterday! As a new semester begins at the Xavier Institute, the X-Men-in-training are just getting comfortable with one another as the devastating news hits: The teachers plan to separate them into different squads! What happens when best friends are torn from one another in the name of school policy? And what do the New X-Men do about it?