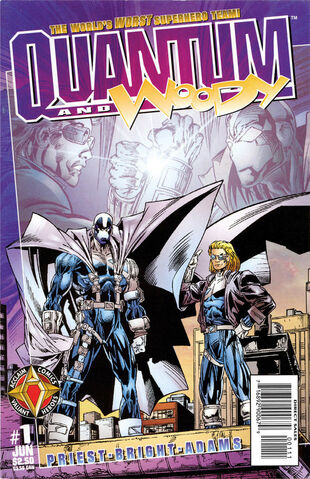 
Vol 3: October 2017
Quantum and Woody (Volume 3) is an ongoing series published by Valiant Entertainment beginning in December 2017. The series is written by Daniel Kibblesmith with art by Kano. It features the world’s worst superhero team Quantum and Woody.

According to the indicia the official title of this series is: “Quantum and Woody! (2017)”.

Instead of a Brushed Metal variant cover for the first issue, Valiant offered “The Most Variant Cover of All Time!” featuring every gimmick known to man. Readers could pre-order a certain amount of issues and receive special pre-order editions (for the same cover price) with exclusive covers and bonus material such as character designs, scripts, and interviews. The first bundle would include issues #1-4 (later expanded to #1-5), and the second bundle issues #6-12.


Vol 4: January, 2020
Quantum and Woody is an upcoming four-issue mini-series published by Valiant Entertainment in 2020, written by Christopher Hastings and illustrated by Ryan Browne. It follows up the conclusion to Quantum and Woody (Volume 3), with the title characters on the run from the government, attempting to reestablish their lives as heroes.