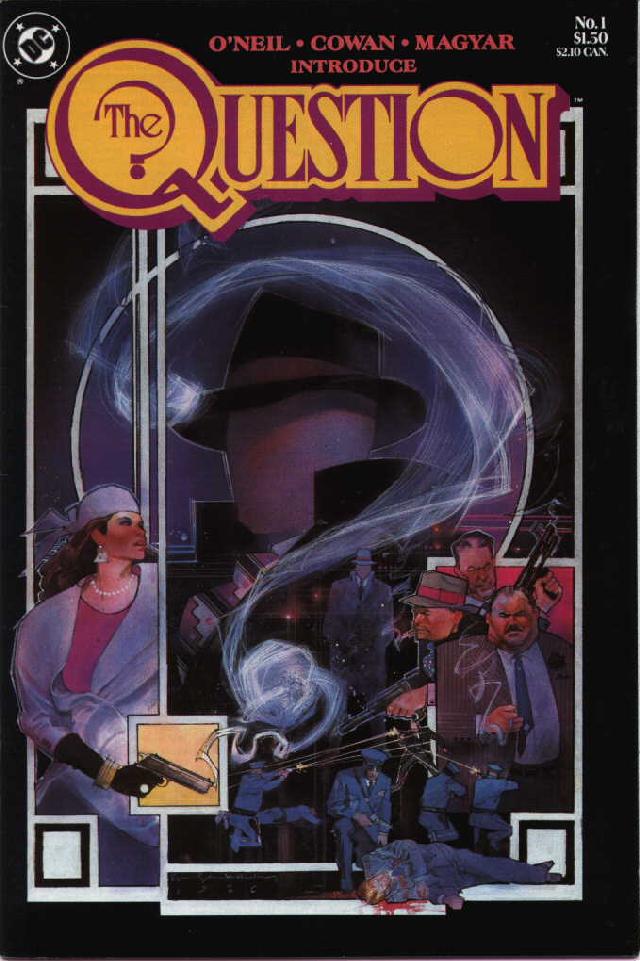 Vol 1: February 1987 – March 2010
Series featuring the Question, which began in the late-eighties and continued for 36 issues until it was canceled. It was revived for a single issue, #37, as part of the Blackest Night event. This series continued into Question Quarterly (1990) and The Question Returns (1997).
The Question was one of the characters acquired by DC Comics from Charlton Comics in the 1980’s. Denny O’Neil was offered two books, either Captain Atom or a new Question series. Preferring the more street level stories, O’Neil chose the Question and was given free reign to push boundaries and experiment on the book. Where Steve Ditko’s original had been an objectivist character, O’Neil’s differing values and desire to make the character his own had him take on a more Zen like belief system after his old persona was symbolically killed off in the first issue. The stories that followed took The Question through Hub City, a decaying crime filled city where he fought against corruption and took on the worst in human nature due to his unrelenting curiosity. The series tackled everything from race, politics, poverty, feminism religion and much more.
Also popular was O’Neil’s recommended reading list featured in the letters column that featured a wide variety of fiction and non-fiction.
Vol 2: January 2005 – June 2005
Vic Sage is a TV journalist with an uncanny ability to break difficult stories, thanks in large part to his relentless crime-fighting campaign as the Question! But has the faceless vigilante’s particular brand of harsh justice finally sent him off the deep end? Prowling the meanest streets of his native Chicago, the trench-coated Question thinks he also walks in another world, a strange shamanic space full of shadowy dangers. When Sage hears the voice of Superman’s home city of Metropolis, he answers the call. Is he crazy? That’s the question.