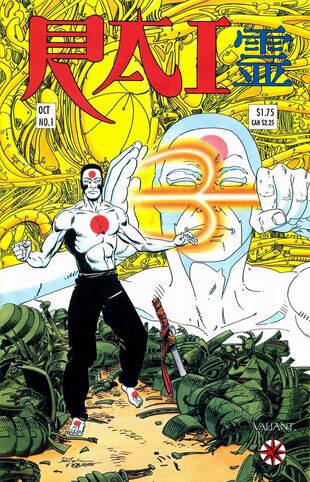 Vol 1: October, 1991 – January, 1992
Rai (Volume 1) is a limited series published by Valiant Comics beginning in 1991. The series was released in “flipbook” format, published in the back of issues of Magnus, Robot Fighter. It also shared its 41st Century setting with Magnus, and the two stories shared continuity. Rai would soon move to his own solo series, Rai (Volume 2).
Vol 2: March 1992 – August 1994
At last – the landmark issue that laid the foundation for the future of the Valiant Universe, featuring the first appearance of Bloodshot! Guest-starring X-O Manowar, Archer, Shadowman, Toyo Harada, the Eternal Warrior and a cast of thousands, the next generation of Valiant heroes begins here! But just what is the Blood of Heroes? And how will it create a legacy that stretches from the modern day into the distant future?
Vol 3: April 2014
The year is 4001 A.D. – led by the artificial intelligence called “Father,” the island nation of Japan has expanded out of the Pacific and into geosynchronous orbit with the ravaged Earth below. With billions to feed and protect, it has fallen to one solitary guardian to enforce the law of Father’s empire – the mysterious folk hero known as Rai. They say he can appear out of nowhere. They say he is a spirit…the ghost of Japan. But when the first murder in a thousand years threatens to topple Father’s benevolent reign, Rai will be forced to confront the true face of a nation transformed…and his own long-lost humanity
Vol 4: November 20 2019
Welcome to the 41st century: New worlds, new characters, new adventures.
Valiant’s critically celebrated cyborg ronin named Rai embarks on a thrilling quest to save the future.
Multiple New York Times bestselling and award-winning writer Dan Abnett (Guardians of the Galaxy) joins forces with breathtaking artist Juan José Ryp (X-O MANOWAR) to begin the essential sci-fi series of the next two thousand years!