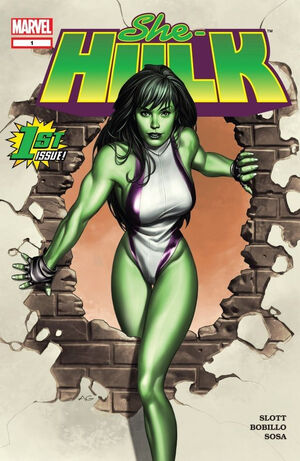 Vol 1: May 2004 – April 2005
SGF (Single Green Female) – outgoing, physically fit, intelligent, great sense of humor. Enjoys clubbing, dishing with gal-pals, and saving the universe. Ready to put old issues behind and make a fresh start. Contact Jen W. at Avengers Mansion – The Sensational She-Hulk! Vol 2: December 2005 – April 2009
Like a few good laughs with your super-powered action? How about a bit of super hero bounty hunting? This book delivers all that and way more as it follows the antics of Jennifer Walters a.k.a. She-Hulk–veteran Avenger and high-powered bounty hunter Vol 3: April 2014 – April 2015
JENNIFER WALTERS IS… THE SHE-HULK! A stalwart Avenger, valued member of the FF, savior of the world on more than one occasion, she’s also a killer attorney with a pile of degrees and professional respect. A 7-foot-tall drink of cool, emerald water, she’s tough enough to knock out Galactus with one punch (possibly?) and has a heart bigger than the moon. But juggling cases and kicking bad guy butt is starting to be a little more complicated than she anticipated. With a new practice, a new paralegal and a mounting number of super villains she’s racking up as personal enemies, She Hulk might have bitten off a little more than she can chew… but she just calls that that Tuesday.