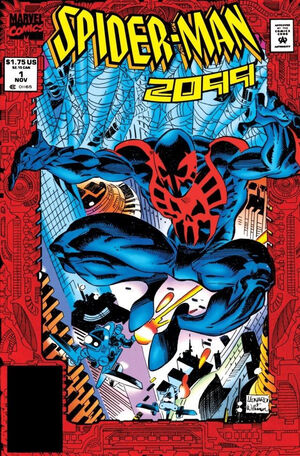 Vol 1: November 1992 – August 1996
In the year 2099, New York City is a different place than the city it was in the “Heroic Age” of today. Giant corporations run the high-tech city, while the “Public Eye’s” cameras monitor for criminal activity. The forgotten and unfortunate live below the towers in the streets of “downtown”. Much has changed, but much too has remained “depressingly the same.
Vol 2:September 2014 – July 2015
The book you have been demanding for months finally hits the stands! Miguel O’Hara is Spider-Man in the year 2099 but he’s currently stuck in the year 2014. He was stranded here by his father who is the head of an evil corporation called Alchemax in 2099. But in 2014, Alechmax has just been formed and Miguel has a chance to stop its corruption before it starts! You’d think being a man out of time would make you a man without enemies, but Spider-Man 2099 is about to discover that he’s not the only one hoping for a better tomorrow, one that might be ensured by The Adjustor eliminating Miguel from the time stream altogether! Join comics legend (and Spider-Man 2099 creator) Peter David and breakthrough artist Will Sliney (Superior Spider-Man Team-up) for the most adventure you’ll find in a book this side of the twenty second century!
Vol 3: December 2015
With a job at PARKER INDUSTRIES, a stable relationship, and uncertain of what impact his actions will have on the future, has decided that it’s time to hang up the webs and retire from being Spider-Man. But when a dangerous new threat appears and puts his new life in jeopardy, he’s got no choice but to don some new threads and tackle the problem the only way he knows how: head on! By the webslinging wonders Peter David and Will Sliney (you know ’em, you love ’em.) this is one EXPLOSIVE Spider-Title you won’t want to miss.
Vol 4: December 11 2019
Miguel O’Hara is a rising star at Alchemax, but his world is about to come crashing down. The future of the Marvel Universe is about to die and the world needs a hero. As Miguel faces a destiny he’s tried to run from all his life, the secrets of 2099 begin to unravel here.