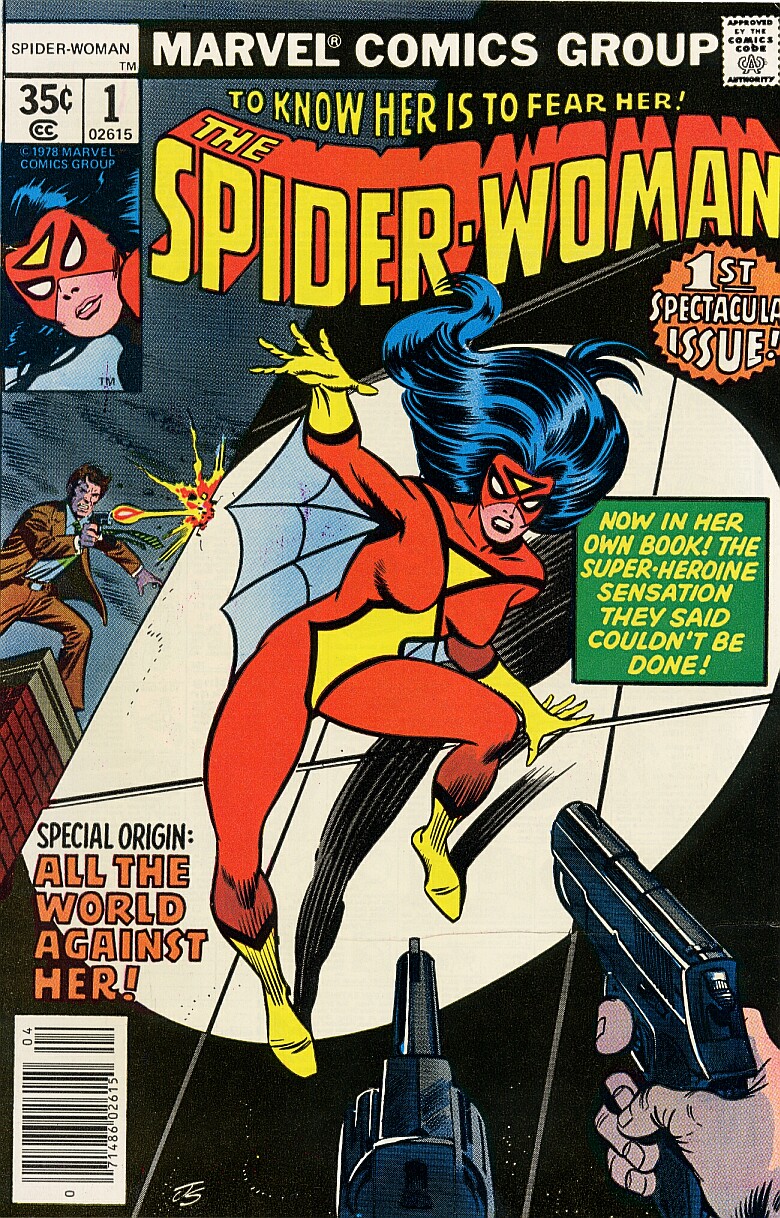 Vol 1: April 1978 – June 1983
Spider-Woman swings in her first ongoing series! Jessica Drew’s life has been marked by tragedy- her capture by Hydra, her entanglement with the High Evolutionary. But now, Jessica is determined to build a new life for herself in London. But with no sense of normalcy, it’s not long before Jessica realizes that her spider self may be easier to handle than her humanity. Has the world turned against Spider-Woman? And who is Jerry Hunt, the S.H.I.E.L.D. agent who swears he’s met Jessica before?
Vol 2: November 1993 – February 1994
Julia Carpenter is Spider-Woman and as a member of the Avengers West Coast, she’s had to face the villainous group known as Deathweb. When they coming calling for a rematch, can Spider-Woman take on the whole team by herself?
Vol 3: July 1999 – December 2000
Cassandra Webb brings together Martha “Mattie” Franklin, Julia Carpenter and a depowered Jessica Drew together to a means of taking down the fourth Spiderwoman, Charlotte Witter, in a power play and revenge story that renders Mattie the next Spiderwoman…with Spiderman and back story included.
Vol 4: November 2009 – May 2010
The team of Brian Michael Bendis and Alex Maleev return to a monthly Marvel comic for the first time since their Eisner award-winning run on Daredevil. ripped from the pages of SECRET INVASION and NEW AVENGERS, this explosive first chapter follows the new adventures of Jessica Drew aka Spider-Woman as she rediscovers her life in a world she did not make.
Vol 5: January 2015 – October 2015
New Ongoing Series/Spider-Verse Tie-In! Jessica Drew has been an agent of S.H.I.E.L.D., and agent of S.W.O.R.D., an Avenger and so much more. But nothing could prepare her for the multidimensional insanity that is Spider-Verse! A war is brewing, and every spider-character in the multiverse is a target! But being a target is something Jessica Drew just won’t abide. She’s a woman with a mission and with Silk, the newest spider-character on the block at her side, she’ll have to put all her training to the test if she wants to make it out of Spider-Verse alive!) bring you a universe spanning adventure starring Jessica Drew Spider-Woman and the newest spider-hero, SILK!
Vol 6: January 2016
Jessica Drew is a private investigator, a super hero and… a mom to be? Since we last saw her, Spider-Woman’s got a whole NEW responsibility — she’s super heroing for two now, after all! Ben Urich and Porcupine are still along for the adventure, too, and aren’t making Jess’ life any easier – half the time they won’t even let her leave the car! How’s a gal supposed to save innocent people and keep herself out of harm’s way? See how in the mother of all Spider-Stories!
Vol 7: March 18 2020
SPIDER-WOMAN IS BACK, AND PULLING NO PUNCHES! Jessica Drew hasn’t been feeling like herself lately (she’s not a Skrull, we promise). When the angry, irritable, and unwell Spider-Woman takes a simple security gig to help get back on her feet, she finds herself besieged by unknown forces out to destroy everything around her. What’s wrong with Jessica? Just how DID she get this job? And who are these violent lunatics who keep trying to blow her up? WHO CARES? Does Spider-Woman have someone to punch? THAT’S ALL THAT MATTERS. An explosive new series that pushes Spider-Woman into new heights of action and adventure from the mad minds of Karla Pacheco and Pere Pérez, this is the Spider-Woman book you’ve been waiting for!