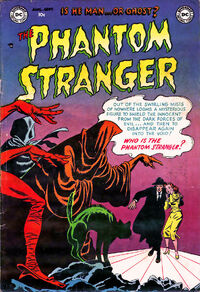 Vol 1: August, 1952 – June, 1953
The Phantom Stranger (Volume 1) was an ongoing series, published by DC Comics. It ran from 1952 until 1953. It starred Phantom Stranger.
Vol 2: June 1969 – March 2010
Sixteen years after he faded into obscurity, the Phantom Stranger rematerialized in Showcase #80 before making his way back into his own series. Yet this dark traveler, whose true name, origins and mission remain unknown was very different to the one who disappeared in 1953. The original stranger was a debunker of the supernatural, but this one was drawn towards it, and possessed formidable powers of his own to combat it – on the occasions when he chose to involve himself in such affairs.The first issue of his own series, likeShowcase #80, contained a new story that framed around reprint tales from both the Stranger’s original series and Star Spangled Comics featuring Dr. Terrence Thirteen, also known as the Ghost – Breaker. The Ghost Breaker made a career out of disproving arcane activity and spent many issues of the series trying to reveal the Phantom Stranger as a charlatan. Although he never succeeded, he proved proficient at unraveling other unknown mysteries – albeit, ironically with the help of the Phantom Stranger.
Vol 3: October 1987 – January 1988
Having been destroyed by the Anti-Fate, the Phantom Stranger slowly coalesces back on the mortal plane. Police Commissioner James Gordon investigates a particularly horrific crime scene. Doctor Bruce Gordon makes note of a series of earthquakes, striking Romania. Dr. Gordon is troubled by the seeming rise of an ancient evil, he long thought put in his past. Natural disasters begin occurring throughout the world.

Tensions escalate between the governments of the United States of America and Russia. Jimmy Olsen tails a mob clerk to the Soviet Consulate, in Metropolis. Lycaon, Chosen of Chaos, preaches at the Temple of Divine Light, in Gotham City. The Phantom Stranger confronts Lycaon. The Phantom Stranger attempts to sway Lycaon’s followers against him, to no avail…