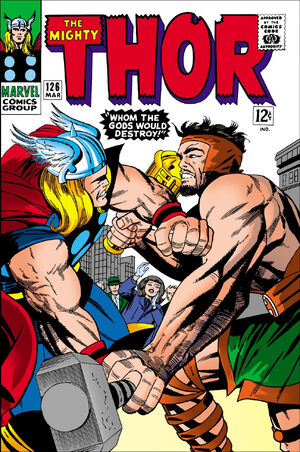 Vol 1: March 1966 – May 2011
Running from March 1966 to September 1996, Thor (Vol. 1) took over from Journey Into Mystery (Vol. 1) with issue #126, and was renamed to Journey Into Mystery (Vol. 3) once again with issue #503.
Vol 2: July 1998 – December 2004
Thor has returned to this dimension to find that much has changed! A man claiming to beHeimdall has taken hostage the “Balloon Bunch Day Care” and promises not to hurt anyone if he gets an audience with the Mighty Thor! The only way to prove if this man is the guardian of the Rainbow Bridge or not is to take him to Asgard. Apon their arrival Thor learns his identity. In anger and sadness of the fall of his great home and kingdom Thor throws his hammer Mjolnir into the ruins of Asgard only to, not to his realization, free the Destroyer! With this “god killer” on the loose The Avengers must act quickly with the help of their most powerful member (Thor). The Destroyer is almost invincible! The Avengers must fight with all that is in them to defeat this great foe! But will that be enough?
Vol 3: September 2007 – January 2009
Not a clone! Not a robot! Not an imaginary story! The God of Thunder is officially BACK! You’ve waited for it, you’ve demanded it…and we say thee yea! The Odinson comes roaring to life in this highly anticipated ongoing series by red-hot superstars J. Michael Straczynski and Olivier Coipel! But how does a god return from Ragnarok? And what place will he find in a world torn by CIVIL WAR?
Vol 4: October 2014
Thor no longer wields Mjolnir and has sunk to the deepest levels of despair. The Good:Jason Aaron & Russell Dauternan do a great job of conveying to the reader Thor’s desperation over no longer being able to wield Mjolnir. From facial expressions to body language the reader is immediately able to sympathize with Thor’s plight in this issue. Another great underlying issue in this comic is the rivalry between Freya and Odin. Freya has been in charge during his leave of absence and clearly has …
Vol 5: June 13 2018
JASON AARON & MIKE DEL MUNDO TAKE THE PRINCE OF ASGARD IN A WHOLE NEW DIRECTION! Thor Odinson has regained his mantle – and with it, a wild new world of trouble on his mighty hands! The artifacts of Asgard have been scattered across the earth, and to reclaim them, Thor will have to face some ugly truths. Like the production cost of hundreds of new hammers! And the Thunder God is going to need every last one of them if he’s going to stop the unstoppable Juggernaut. Jason Aaron takes the Prince of Asgard in a whole new direction with YOUNG GUN artist Mike Del Mundo joining him at the helm! And don’t miss the latest chapter of the King Thor saga with acclaimed BLACK BOLT artist Christian Ward, as the Thor of the far future encounters an old friend who’s undergone some startling changes.
Vol 6: January 1 2020
Featuring action-packed extras including a Cover Gallery, Script, Inked And Color Pages! A BRAND-NEW, SUPERSTAR CREATIVE TEAM TAKES THE KING OF ASGARD TO NEW REALMS OF GLORY! The prince is now a king. All Asgard lies before Thor, the God of Thunder. And after many months of war, the Ten Realms are finally at peace. But the skies above the Realm Eternal are never clear for long. The Black Winter is coming. And the God of the Storm will be powerless before it.