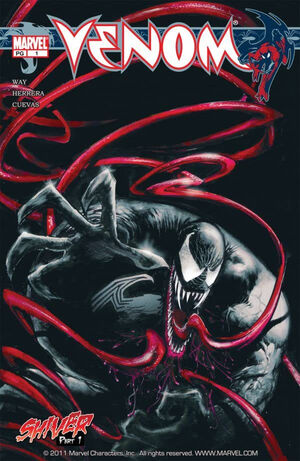 Vol 1: June 2003 – November 2004
Venom’s back and has popped up near the Arctic Circle, leaving a trail of dead bodies in his wake. Now able to jump from host-to-host with the greatest of ease, Venom is on the run from mysterious forces, each with their own agenda for the elusive alien. But is this the same Venom that we’ve come to know and fear? How does Eddie Brock figure in this?
Vol 2: May 2011 – December 2013
America…meet your newest Hero! The lethal alien symbiote known as Venom is in the custody of the U.S. military… And with a familiar face from Spider-Man’s world inside the suit, the government’s own personal Spidey is going into action as one of the nation’s top covert agents in hostile territory!
Vol 3: November 23 2016
VENOM IS BACK AND BADDER THAN EVER! The symbiote you know and love has returned to New York City. No more “Agent of the Cosmos.” No more “Lethal Protector.” It’s time for a new Venom, and it’s great to be bad.
Vol 4: May 9 2018
In the wake of S.H.I.E.L.D.’s collapse, an ancient and primordial evil has been awakened beneath the streets of New York, and with it, something equally evil has awakened in that most Wicked of Webslingers – VENOM! Still a Lethal Protector of the innocents in New York, this never-before-seen threat could force Venom to relinquish everything it holds dear – including Eddie Brock! Join two of the hottest creators in comics today, Donny Cates and Ryan Stegman, for a VENOM adventure a thousand years in the making!
Vol 5: Oct 13, 2021
LIKE FATHER, LIKE SON
AN EPIC NEW ERA FOR THE SINISTER SYMBIOTE STARTS HERE! Hot off the heels of VENOM #200 and EXTREME CARNAGE, we’re closing out 2021 with one of the most ambitious books in symbiote history—an all-new VENOM from some of comics’ greatest talents! Marvel mainstay Al Ewing, who himself has just ended a character-redefining run on IMMORTAL HULK, is being joined by Ram V, a horror maestro all his own, to craft a mind-bending and gut-wrenching tale of symbiosis the likes of which the Marvel Universe has never seen! AS IF THAT WASN’T ENOUGH, they’ve been joined by industry legend Bryan Hitch, who is leaving IT ALL ON THE PAGE! We haven’t led you astray yet, have we? So trust us when we tell you that you have NEVER seen a VENOM like this!