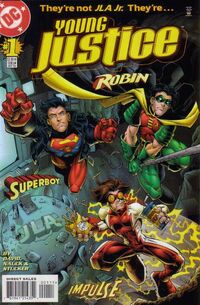 Vol 1: September 1998 – May 2003
Superboy, Impulse and Robin are all having a camp-out at the old Justice League headquarters. They manage to make such a mess that they wake up the Red Tornado who has lied in a comatose state for years until they inadvertently woke him up. After a brief conversation they get a message that comes through on the monitor and when it does Impulse jumps them through into a new adventure that gives them their name and uncovers their first villain and the Super-Cycle.
Vol 2: January 2011 – April 2013
Based on the highly anticipated, all-new hit animated show from Warner Bros. debuting in January on Cartoon Network! It’s moving-in day for Superboy and Miss Martian as they choose their rooms at their new headquarters!
Vol 3: January 9 2019
Superboy! Wonder Girl! Robin! Impulse! Amethyst! They’re all united in YOUNG JUSTICE #1, the debut issue of a brand-new series that also introduces new heroes Teen Lantern and Jinny Hex! When the nightmare dimension known as Gemworld invades Metropolis, these teen heroes reunite to deal with the situation—but they’re shocked to discover the battle may be the key to the return of Conner Kent, a.k.a. Superboy! This mix of fan favorites and new legacy heroes will be the center point for some of the biggest goings-on at DC! As if that weren’t enough, Bendis reunites with all-star artist Patrick Gleason (SUPERMAN, ACTION COMICS, GREEN LANTERN CORPS) to bring the new heroes of DC’s Wonder Comics to life!