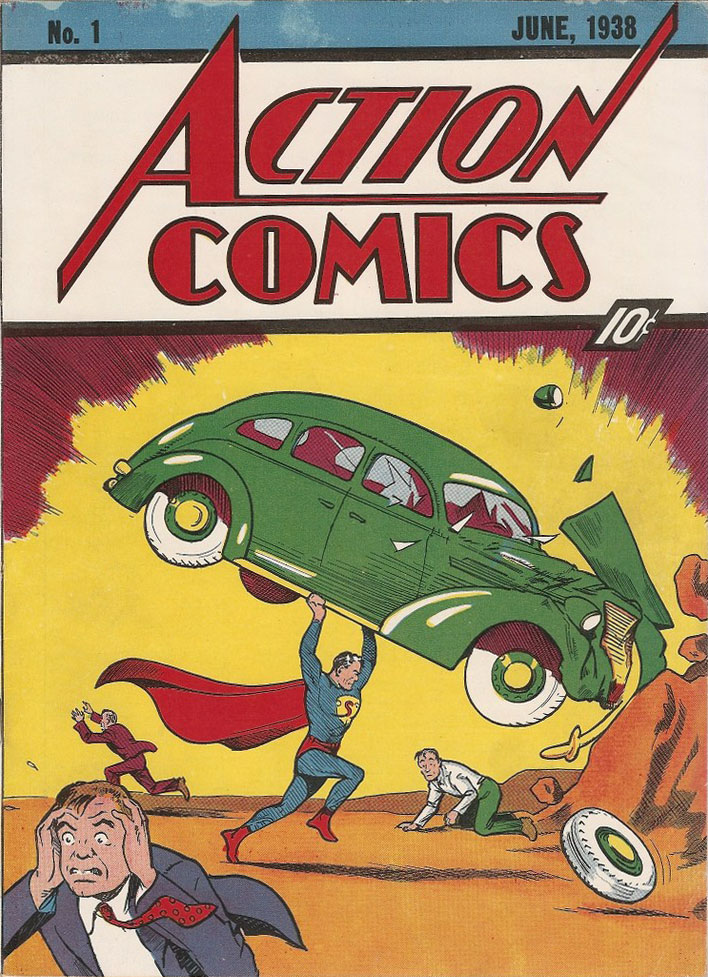 Vol 1: June 1938
Action Comics was the second longest running comic book series of all time, with only Detective Comics (Volume 1) having been published longer. In 2018, it became only the second American comic book in history (after the 1930s-1960s Dell Comics title Four Color) to publish a 1,000th issue.

Aside from its venerable publication history, Action Comics is more famously known as the birthplace of Superman, the most well-known super-hero in the world. Superman made his first appearance in June of 1938 in the title sequence story from Action Comics #1.

For the first several years of publication, Action comics existed as an anthology series, featuring multiple twelve-page stories featuring a variety of characters ranging from Congo Bill to Zatara. By the 1950s, the popularity of Superman had reached such a zenith, that the title became informally regarded as a “Superman” title. By the 1970s, Action Comics featured Superman exclusively with occasional eight-page back-up stories spotlighting various characters such as the Atom or Aquaman. For a year in 1969 and 1970 the back-up story was home to the Legion of Super-Heroes.

In the mid-1980s, Action Comics endured several format changes. In September of 1986, the title went on a four-month publishing hiatus, in order to prepare for the Post-Crisis Superman relaunch event. The editors of DC comics wanted to produce three regular ongoing Superman titles. Beginning in January of 1987, Action Comics became a Superman team-up book, following the format of the late comic title, DC Comics Presents. It maintained this status until the celebrated 50th anniversary landmark 600th issue. From issue #601–642, Action Comics became a 48-page anthology series again, however this time issues were distributed on a weekly basis and the title was officially changed to Action Comics Weekly. With issue #643, Action Comics Weekly reverted to its original monthly publication, and the title was changed back to Action Comics. Its brief tenure as a weekly contributed to Action passing the older Detective Comics in issue count.

With the return of a monthly publishing schedule, Superman stories began to follow a chapter-based continuity, with storylines moving from one title to the next. In order to provide an easily accessible reading order for consumers, the DC editorial staff began using a secondary numbering system displayed on the cover of each issue. These continuity markers were informally known as the “triangle” numbers, and were recycled at the end of each publishing year. Every Superman comic book published from the mid to late 1990s (including Annuals and specials) possessed a sequential chapter number on the cover. Eventually, writers began containing their storylines to single titles again and the DC editors ceased providing the chapter markers on the covers. This practice was resurrected for the two year New Krypton storyline.

In 2011, as part of The New 52 reboot, the numbering of Action Comics was reset at #1 and a “Volume 2” was launched. This proved to be only temporary, however, as five years later the legacy numbering was restored, allowing Action to reach the 1,000-issue milestone two years later (coinciding with the 80th anniversary of both the magazine and of Superman).
Vol 2: November 2011 – July 2016
Action Comics (Volume 2) is one of The New 52 ongoing series to be published after Flashpoint. It stars Superman.

In 2016, this series was cancelled as a result of DC Rebirth, and Action Comics (Volume 1) resumed publication with Action Comics #957, the number it would have had Volume 1 been in continuous publication.