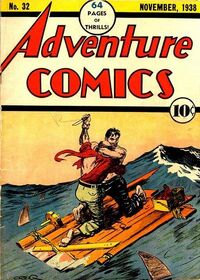 Vol 1: November 1938 – October 2011
Adventure Comics was originally known as New Comics. After issue #11, the title changed to New Adventure Comics until issue #32, where it changed again to Adventure Comics. The final issue of the original series was in 1983.

From 1938 to 1946, Adventure Comics starred a number of Golden Age superheroes, including the Sandman, Hourman, Starman, and Manhunter, with a variety of backup features including Shining Knight, Genius Jones, Barry O’Neill, Cotton Carver, and Steve Conrad: Adventurer. In 1946, all previous features were cancelled and Superboy, Aquaman, and Green Arrow were transferred to Adventure Comics from More Fun Comics, and they remained the series’ main features well into the 1960s.

Vol 2: April 2009 – August 2010
It’s the return of one of DC Comics’ longest running books and one of its greatest modern-day heroes – Conner Kent! In our first heroic issue, Superboy can’t wait to jump back into his life – but which life will it be? With a clarity he’s never had before, Conner makes a beeline for the greatest place on Earth…Smallville?