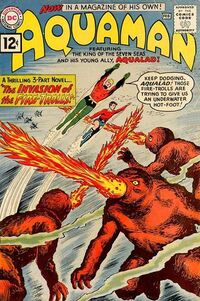 Vol 1: February 1962 – September 1978
In the midst of setting up their undersea headquarters, Aquaman & Aqualad are suddenly beset by strange occurrences. The culprit is revealed to be Quisp, a self-described Water Sprite, from a “secret sea beneath the ocean.” Quisp has come to warn Aquaman of an impending peril to his world. A trio of colossal Fire Trolls have broken free of a volcano, through a fissure in Quisp’s world. The fissure extends into Aquaman’ s world , as well. No sooner has Quisp explained the threat, when the Fire Trolls emerge. Aquaman, Aqualad & a pod of sperm whales rush to engage the Fire Trolls, but are unable to slow their ascension to the surface. Racing ahead on dolphin back, Aquaman, Aquald, & Quisp reach the Fire Troll’s destination first., a jungle island, housing a U.S. army missile base, still under construction. A pitched battle ensues, with Aquaman joining the military forces in, unsuccessfully, trying to repel the invading Fire Trolls. Aquaman rationalizes that intense cold may be the downfall for the Fire Trolls, & with Quisp’s help, races to the mainland atop a great waterspout, to retrieve the necessary chemicals.
Vol 2: February 1986 – May 1986
Aquaman settles back in New Venice until it is suddenly and totally destroyed by Ocean Master. The tragedy catapults Aquaman back to Atlantis, where he discovers that ancient talismans dating back to Arion’s time are missing!
Vol 3: June 1989 – October 1989
Published following the semi-reboot seen in Legend of Aquaman Special, this 5 issue mini-series saw Atlantis be invaded by a group of sentient jelly fish, and also portrayed the ongoing rift between Aquaman and Mera as their marriage fell apart.
Vol 4: December 1991 – December 1992
Aquaman has lost everything he holds dear–his wife, his child, his kingdom–and is now an obsessed man, driven by non-stop super-heroics as the King of the Seven Seas. He’s a man who keeps his pain inside, allowing his anger and sorrow to emerge in violent action!
Poseidonis is under attack and nobody knows what is happening. The King knows they are in need of help and nobody knows where Aquaman is. They send messengers in all directions looking for him to come and help them.
Vol 5: August 1994 – January 2001
The King of the Seas stars in his very own series written by the legendary Peter David (SUPERGIRL, HULK). Whether on land or in the sea, Aquaman battles against foes with a whole-new look and a whole-new status quo!
Vol 6: February 2003 – April 2006
Battered and left to perish on an exposed reef, Aquaman discovers, to his horror, that all the denizens of the deep are instructed to attack him without mercy. But though his beloved ocean is off-limits, a mysterious freshwater lake may give him more than just sanctuary.
Vol 7: November 2011
It’s the first appearance of Atlantis and Aquaman learns various secrets about his past and his family.
How will this story of Arthur’s past set the stage for his future? Find out here!
Vol 8: June 22 2016
Black Manta returns, and as Aquaman attempts to broker lasting peace between Atlantis and the surface world, his greatest foe engineers a plan to destroy everything and everyone the undersea hero loves.
THEY SAID IT: “I’m excited to draw a vast undersea world with all the visual flourishes of fantasy and science fiction that it affords,” says artist Brad Walker. “I’ve done so much work in outer space-based comics, and I love the freedom that allows.”