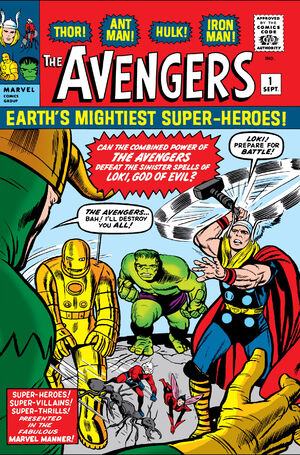 Vol 1: 1963 – 2012
And there came a day, a day unlike any other when Earth’s mightiest heroes joined forces to face the threats no single superhero could withstand! The Avengers where born!
Vol 2: November 1996 – November 1997
Loki, the Norse God of mischief, floats down from space. He finds himself in the place, not knowing why and how he has come here. He senses his brother Thor, God of Thunder and hatred flows through him. He fails to detect the presence of Asgard and its ruler, all fatherOdin. Loki is initially disturbed, but knows that the right moment to rid himself of his brother is now. He speeds towards Earth.
Vol 3: February 1998 – December 2004
Every member of the Avengers, past and present, is simultaneously attacked by an unknown source. Every available member makes their way to the Avenger Mansion to figure out who of their many foes could be responsible for this attack. With the return of Thor, the Avengers find out that it has something to do with his homeland, Asgard, so they go across the planet Earth to find different Asgardian artifacts. When uncovering the Twilight Sword, the Avengers find that Morgan Le Fey and her son Mordred are the ones responsible for this huge attack. Morgan places a spell on the planet Earth at the last moment, leaving the Avengers blinded in a flash of light…
Vol 4: July 2010 – January 2013
The Heroic Age is here! There came a day! A day unlike any other… where two of Marvel’s top creators teamed up for the very first time to create a bombastic new monthly Marvel comic that not only ushers in the Heroic Age of Marvel Comics but unleashes onto the world the most blockbuster Avengers team ever! Who will answer the call? And will they assemble just in time… because Kang the Conqueror is here from the future. And wait till you find out why… ! Bonus back up feature: the oral history of the Avengers, part one. A brand new illustrated look at the Avengers in a way you have never seen before by series writer Brian Michael Bendis.
Vol 5: February 2013 – June 2015
It’s a new beginning with familiar faces for the Avengers. But will they be prepared for Hickman, Opena and a new threat?
Vol 6: December 2015
The kickoff to the All-New Avengers line begins here, with new stories of the All-New, All-Different Avengers, Squadron Supreme, A-Force, New Avengers, Ultimates and Uncanny Avengers! Someone is carefully studying the movements of the Avengers and those in their orbit- but do they mean to harm, or help? Find out the first clues in this special launch issue!
Vol 7: 2017
The time has come! Their ranks shattered by Civil War, their spirits weighted down by a toll both personal and spiritual, Earth’s Mightiest Heroes must find the resolve to stand united one final time against their greatest foe! Captain America! Thor! The Vision! The Wasp! Spider-Man! Hercules! When the dust settles, not a one of these valiant heroes will make it to the final page alive! This is KANG WAR ONE!
Vol 8: July 2018
Thor Odinson. Steve Rogers. Tony Stark. The Big Three of the Avengers are reunited at last! And just in time to save the world from total annihilation at the hands of their most powerful enemies yet: the 2000-foot-tall space gods known as Celestials. Behold the coming of the Final Host. Who will answer the call to assemble for a wild new era of Earth’s Mightiest Heroes? Hint: one of them has a flaming skull for a head. And what strange, world-shaking connection exists between the Final Host and Odin’s ancient band of Prehistoric Avengers?