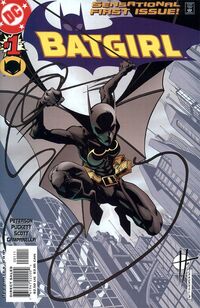 Vol 1: April 2000 – April 2006
Flashback to years ago. Cassandra is a little girl and her father David Cain sets up a camera to tape her performance. A bunch of full grown men are standing on sheets of plastic and offered a knife. All they have to do to get paid is to take the knife and kill the little girl. One of them disproves but before he can leave Cassandra knocks the teeth from his mouth and his blood pools on the floor. He reaches for the knife but Cassandra beats him to it, she breaks his arm. The men scream…
Vol 2: September 2008 – February 2009
Batgirl is on the search for David Cain and Slade Wilson. She fears that she may break her oath to never again take a life. Her investigation leads her to two gun shippers who provide her with the name of a manufacturer, Armand Lester. She later returns to the Batcave to crosscheck the name in the database. Nightwing arrives, and doesn’t like the idea of Cassandra having unsupervised access to the Batcomputer. The two briefly spar, but Batman and Robin arrive to break up the fracas. Batman vouches for Cassandra’s integrity, but adds that he is constantly monitoring her. Batgirl leaves and continues her personal investigation. Her search brings her to a factory where a costumed woman named Marque is torturing three innocent civilians.
Vol 3: October 2009 – October 2011
In the wake of “Batman R.I.P.” and BATTLE FOR THE COWL, a new heroine has emerged in Gotham City, and as she begins her nocturnal crusade to take back the night, she will truly learn what it means to wear the mantle of the Bat. But who is this young woman, and why has she donned the cape and cowl?
Vol 4: November 2011
Barbara Gordon is back as Batgirl – and she’s going to have to face the city’s most horrifying new villains as well as the dark secrets from her past. You won’t want to miss this stunning debut issue from fan-favorite Birds of Prey writer Gail Simone!
Vol 5: July 2016
The Batgirl you know and love is going global with Eisner Award-winning and New York Times best-selling writer Hope Larson (A Wrinkle in Time, Goldie Vance) and all-star artist Rafael Albuquerque (AMERICAN VAMPIRE). In order to up her game, Babs travels to Japan on a quest to train with the most elite modern combat masters of the East. But when a chance meeting with an old friend puts a target on her back, Batgirl may need to use her new skills to solve a deadly mystery.