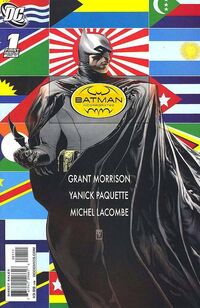 Vol 1: January 2011 – October 2011
Bruce Wayne has survived Darkseid’s Omega Sanction, seen the end of time, returned to Gotham, defeated Doctor Hurt, and has admitted to the public that he has been “financing” Batman from the beginning of his career. But due to something he saw coming at the end of time, something only he knows of, now he must take actions to prevent whatever is coming with the global expansion of Batman’s war on crime, Batman Incorporated!
Vol 2: July 2012 – October 2013
Batman, Incorporated wants you! • Batman has a war to fight, but first he must recruit an army to combat the menace of Leviathan.
• See how The Dark Knight assembled his lieutenants!
Vol 3: Octorber 11,2022
From the pages of Batman comes an all-new, all-exciting adventure for Ghost-Maker and his Batman Incorporated team! The team’s trust issues and detective skills are immediately put to the test when someone from Ghost-Maker and Batman’s recent past is brutally murdered… Is this an isolated event, sending a message to the two? Or is this the start of something darker and more sinister? (Hint–it’s sinister and dark!)