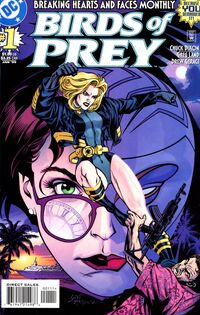 Vol 1: January 1999 – April 2009
When Oracle sends Black Canary on a cruise to investigate the disappearance of some of high society’s most upper-crust members, the tables quickly turn, and Canary finds herself imprisoned in a mastermind’s stronghold with the psychotic Hellhound hot on her trail.
Vol 2: July 2010 – October 2011
Soaring out of Brightest Day, the Birds are back in town! Because you demanded it, fan-favorites Gail Simone (Wonder Woman, Secret Six) and Ed Benes (Justice League, Green Lantern) reunite to reinvent the book where they made their explosive debut as a team. Oracle, Black Canary, Huntress and Lady Blackhawk all return to Gotham City where they belong – and they’ve brought a couple of new friends (or are they foes?) along with them!
Vol 3: November 2011 – October 2014
One is wanted for a murder she didn’t commit. The other is on the run because she knows too much. They are Dinah Laurel Lance and Ev Crawford – a.k.a. Black Canary and Starling – and together, as Gotham City’s covert ops team, they’re taking down the villains other heroes can’t touch. But now they’ve attracted the attention of a grizzled newspaper reporter who wants to expose them, as well as a creepy, chameleon-like strike team that’s out to kill them.