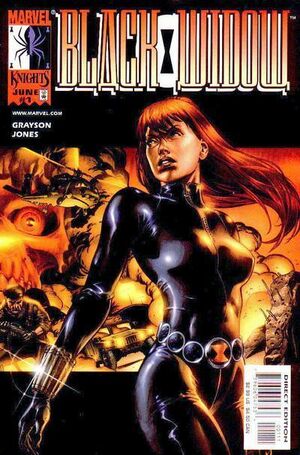 Vol 1: June 1999 – August 1999
Natasha Romanoff has been assigned to track a new bio weapon created by Dr. Didier Ines. With Yelena Belova, the soon-to-be new Black Widow, shadowing Natasha, the pair may be in for more trouble than they realize. Vol 2: January 2001 – May 2001
Natasha Romanoff begins her mission as Yelena Belova. She quickly discovers that her true identity may be under fire sooner than she thinks as she comes face-to-face with the real Yelena Belova, disguised as Natasha! Vol 3: November 2004 – April 2005
The deadliest agent in the Marvel Universe has finally gotten out of the spy game, and she’s not asking for much, just a life of her own. When a sudden assassination attempt provides a harsh reality check, the former Soviet agent tracks a string of international killings that will lead her back to a Russia she can barely recognize. Vol 4: June 2010 – January 2011
The deadly super-spy from Iron Man 2, Invincible Iron Man and Captain America in her own ongoing series! Natasha Romanoff is not a super hero. She’s not psychic. She doesn’t fly. And yet as the Black Widow, she manages to hold her own against a world of incredibly powerful enemies… and allies. But now someone has tried to kill Natasha… and almost succeeded. Injured gravely, almost beyond her ability to recover, Black Widow sets out to find her attacker… with no suspects and no leads. Who could be deadly enough to get the drop on Natasha? And what connections do they have to some of her closest super hero friends… ? Plus, a backup detailing the deadly history of the Black Widow! Vol 5: March 2014 – September 2015
I’ll admit, I was somewhat skeptical of this series when it was first announced. It seemed to simply cater to those looking for another female centric book, and though that isn’t bad, when it’s done for the sake of having one, it usually doesn;t end well (look at The Fiercest Warriors for proof). Well, this single issue proved me completely wrong. Like, entirely. It’s smart, fun, and, though the tone is on the darker side, it is never depressing, treading along the line of introspective and thou… Vol 6: May 2016
S.H.I.E.L.D.’s Most Wanted! The Eisner Award-winning team of Mark Waid and Chris Samnee are taking Black Widow on the lam! Natasha has spent years gathering secrets, and when some of the darkest ones begin mysteriously going public, no one is safe. With her betrayed former confederates at S.H.I.E.L.D. on her heels and a lifetime of training and ingenuity at her disposal, Natasha’s out for answers in a knock-down-drag-out tale of action and espionage! Hidden enemies, old friends and unusual allies collide, and all eyes are on Black Widow. The chase is on! Vol 7: January 16 2019
…AND HELL FOLLOWED WITH HER. Natasha Romanoff was trained to kill. For years now she’s tried to overcome that programming, to side with the angels…to be a hero. And where’d that get her? Killed. By one of the few true friends she allowed herself to have. Now she’s back from the dead, angry as hell and finding those better angels harder and harder to hear. Jen and Sylvia Soska — the Twisted Twins of horror — join rising artist Flaviano to weave a web of vice, violence and vengeance that will net Natasha the biggest bad men she’s ever faced… or put her back in the ground for good. Vol 8: September 02 2020
KELLY THOMPSON. BLACK WIDOW. ‘NUFF SAID! Best-selling, Eisner–nominated writer Kelly Thompson (CAPTAIN MARVEL, STAR) and rising star artist Elena Casagrande (Catwoman) launch a new BLACK WIDOW series that changes everything! Natasha Romanoff has been a spy almost as long as she’s been alive. And she’s never stopped running, whether she was working for the good guys…or the bad. But Natasha’s world is about to be upended. Beyond San Francisco’s Golden Gate lies a mystery that only the Marvel Universe’s greatest spy can solve. Don’t miss the heartbreaking thrill ride of 2020!