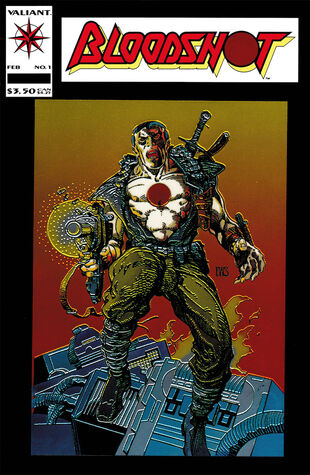 Vol 1: February 1993 – August 1996
Angelo Mortalli has become the ultimate killing machine. His memories were erased and his blood was infused with microscopic computers called nanites. These nanites allow him to heal wounds quickly, dominate electronic devices, and fully control every aspect of his body to maximize his physical capabilities. A modern-day Frankenstein, he wages a one man war– taking out the mob, the police and his covert government creators– in his struggle to find out who he was and what he has become.
Vol 2: July 1997 – October 1998
Raymond Garrison is only sure about one thing: that he is not Raymond Garrison. Having survived death, with no recollections, his mind, body and soul have been remade. A mysterious organization, Project Lazarus, has formatted his body with nanite enhancements that grant him superhuman abilities, but also leave him more machine than man, and more monster than human. After escaping his captors, Bloodshot now searches for answers as to who he is, destroying anything that attempts to stop him.
Vol 3: July 2012 – November 2014
With EXCLUSIVE DIGITAL CONTENT including original art!
Your name is Angelo Mortalli. Your brother is trapped behind enemy lines and on the verge of– no. That’s not right. Your name is Raymond Garrison. You’ve retired from the dangers of the field, but a desperate plea from your oldest friend plunges you into a vicious firefight that– no. That’s not right, either. You are Bloodshot. You are the shade of gray that freedom requires. The perfect confluence of military necessity and cutting-edge technology. A walking WikiLeaks that is a reservoir of dirty secrets that could set the world on fire. And you’ve just been captured.
Vol 4: September 25 2019
A brand-new ongoing series! Bloodshot is a nanite-fueled supersoldier forever at war. What happens to the world when he starts picking his own battles? Will this one-man army be able to end the fighting—or just leave more destruction in his wake? Bloodshot’s missions have made waves, as now the shadowy BLACK BAR has their sights set on him—but what do they have planned for this unkillable hero?