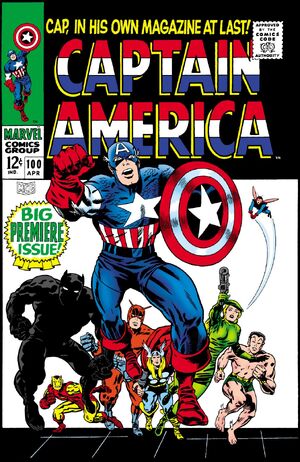 Vol 1: April 1968 – August 2011
The Star-Spangled Avenger fights for freedom! Emerging from years on ice following World War II, Steve Rogers must adapt to a world that has gone on without him while also protecting his nation from the forces that would conspire to tear it apart!
Vol 2: November 1996 – November 1997
This is an abomination. This is the worst art (Rob Liefeld) ever to be seen in a Captain America comic. I hear tell that Marvel cancelled Captain America vol. 1 in order to let Rob Liefeld take over the character. I can’t imagine a character more mismatched for Liefeld’s… talents. This is a travesty. I think Liefeld leaves this series a few issues in. I will check those out, but not this. Not this….
Vol 3: January 1998 – February 2002
Steve Rogers finds himself on the streets of Tokyo with no memory of where he has been for the last year. Before he can get his bearings, Captain America is called into action to stop a group of terrorists who are protesting the Americanization of Japanese culture.
Captain America finds himself back on Earth in the middle of Japan. He’s confused by the amount of excessive veneration he receives but puts it aside to save innocent lives from a bombing plot.
Vol 4: June 2002 – December 2004
In the aftermath of 9/11, Cap must deal with the way America – and the world – have changed. From the ruins of the World Trade Center to the horrors of a small town shaken by terrorism, this is one double-sized first issue you’ll never forget – and neither will Marvel’s star-spangled champion. Said Rieber: “The man’s a soldier: fierce, focused, and absolutely dedicated to the American dream.” He fights for the people – we, the people….
Vol 5: January 2005 – July 2009
It’s a new beginning as four time Eisner-nominated Best Writer Ed Brubaker makes his Marvel debut, joined by white-hot artist Steve Epting! As the new regular creative team, they will take Cap’s life in directions fans will never see coming! In just this first issue, the Red Skull lays the groundwork for his most devastating attack ever on Captain America and the land he holds dear…and with the Cosmic Cube in his possession, how can Cap hope to stop him? Find out in the shocking twist-ending that will have everybody in the industry talking!
Vol 6: September 2011 – December 2012
Steve Rogers is back as Captain America. With Ed Brubaker and Steve McNiven on board, there’s no reason you shouldn’t pick this issue up. It’s also a great jumping on point for new readers. Loads of action along with great art to make readers happy.
Vol 7: January 2013 – December 2014
Rick Rememder takes over the adventures of CAPTAIN AMERICA with John Romita Jr. The story will quickly set this series apart from what we’ve seen before.
Vol 8: October 2017
SECRET EMPIRE TIE-IN! TWO HEROES, ONE MANTLE, ZERO QUARTER!
Vol 9: July 4 2018
IT IS WINTER IN AMERICA.For over 70 years, he has stood in stalwart defense of our country and its people. But in the aftermath of Hydra’s takeover of the nation, Captain America is a figure of controversy, carrying a tarnished shield…and a new enemy is rising! Who are the Power Elite? And how do they intend to co-opt and corrupt the symbol that is Captain America?
Vol 10: April 20, 2022
When Arnim Zola launches a catastrophic attack on New York City, he meets his match—in Sam Wilson and Steve Rogers! In the explosive battle that follows, two Captain Americas prove better than one, and Sam and Steve decide they might just keep a good thing going… Tochi Onyebuchi (BLACK PANTHER LEGENDS), Jackson Lanzing & Collin Kelly (KANG THE CONQUEROR) and Mattia De Iulis (THE MIGHTY VALKYRIES, INVISIBLE WOMAN) kick off an incredible new CAPTAIN AMERICA saga—you won’t want to miss what comes next!