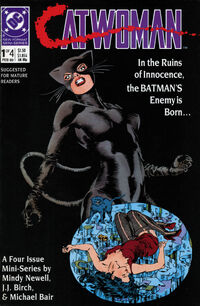 Vol 1: February 1989 – May 1989
At the beginning of the story a young prostitute (Selina Kyle) is shown half naked and beaten severely. An elderly nun named Sister Elizabeth then comes to the alley. She moves away a cat saying she will not feed it like her fellow nun, then is horrified when she sees Selina. Sister Elizabeth calls an ambulance and the Gotham Police who all ask the nuns if they know her name, but none do. As the police and paramedics leave a nun arrives, while Selina leaves carrying a cat. Sister Elizabeth asks her fellow nun (Maggie Kyle) to put the cat away, but the visibly sad Sister Magdalene says she always had cats at home. Sister Elizabeth then asks Maggie if she has seen her sister yet, but Magdalene says no (unaware that her sister was the prostitute).
Vol 2: August 1993 – July 2001
In the wake of Knightfall, Catwoman finds herself working for Bane, who now runs Gotham City from the shadows. She steals for him, under the watchful eye of a handler named Leopold, whose only mission in life is to make sure she’s not skimming off the top. In her civilian guise, it’s revealed that Selina has taken a young runaway under her wing, a girl named Arizona, who reminds her of her old friend from the East End, Holly Robinson.
Vol 3: January 2002 – March 2010
Selina Kyle makes her triumphant return as Catwoman, in a stylish new ongoing series written by Ed Brubaker (BATMAN) and illustrated by Darwyn Cooke (BATMAN: EGO) and Mike Allred (Madman). A serial killer is racking up bodies in her old haunts, taking her back to a life she thought she’d left behind permanently.
Vol 4: November 2011
Meet Catwoman. She’s addicted to the night. Addicted to shiny objects. Addicted to Batman. Most of all, Catwoman is addicted to danger. She can’t help herself, and the truth is – she doesn’t want to. She’s good at being bad, and very bad at being good. Find out more about what makes Catwoman tick in this new series from writer Judd Winick (Batman: Under The Hood) and artist Guillem March (Gotham City Sirens)!
Vol 5: July 4 2018
The wedding night’s barely over, but Catwoman’s back on the streets, this time to expose a copycat who’s pulling heists around Gotham City. As Selina cracks the whip on her former criminal cohorts, she’s attracting unwanted attention from one of Gotham’s most dangerous groups. The mob? Nope. Try the GCPD.