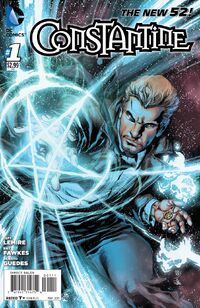 Vol 1: May 2013 – May 2015
John Constantine is an occult detective and professional sorcerer from Liverpool, England. His gritty and brutal attitude makes him recognizable as a cynical, foul-mouthed, chain-smoking anti-hero. Because of his long stint as a Vertigo Universe character, he appeared exclusively in his own series Hellblazer for many years during which he aged in real time. He has been a member of Justice League Dark, the Newcastle Crew and the Trenchcoat Brigade