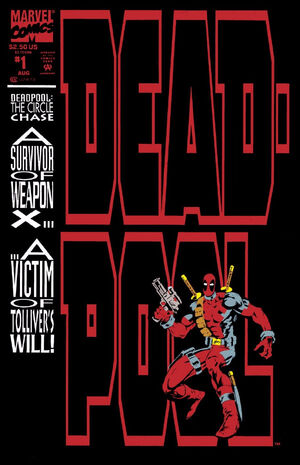 Vol 1: August 1993 – November 1993 | Other name: Deadpool: The Circle Chase
As mercenaries hunt for Deadpool on the war-torn streets of Sarajevo, our hero heads to his safehouse to find Weasel. Weasel and Deadpool talk about Tolliver’s will and how Tolliver has left his estate and money up for grabs. While they talk, Weapon X arrives and a fight breaks out. Both Deadpool and Weapon X are looking for information, the only problem is that neither one has the information the other is needing. Weasel manages to bring the two to their sense ending the fight but, before Weapon X leaves, he warns Deadpool that Slayback has been found alive
Vol 2: August 1994 – November 1994 | Other name: Deadpool: Sins Of The Past
Black Tom is once again broken out of holding by the Juggernaut. This time, however, the boys take a doctor with them. Later, Deadpool is hounded by men who work for Black Tom. Banshee and Siryn drop in the help. All seems well until Deadpool’s regeneration abilities stop working.
Vol 3: January 1997 – October 2002
His assignment is to level a abandoned building, but when setting the device he notices that the station is not so abandoned after all. But, it is too late-the bomb he placed goes off and damages vital equipment. Equipment that pulls Gamma Radiation out of the earth’s atmosphere. Now, with the “entire southern hemisphere” in danger, Wilson must battle Sasquatch of Alpha Flight and risk everything to patch the damage he just created.
Vol 4: November 2008 – December 2012
The Merc with a Mouth is back and ready to kick butt in his brand new on-going series! Join the Crimson Nutcase, DEADPOOL, for action and wisecracks!
Vol 5: January 2013 – April 2015
Dead former United States presidents, from George Washington to Gerald Ford have been resurrected, and that’s BAD. The Marvel heroes can’t be the ones to stop them, someone is needed with the reputation, skills and plausible deniability to take out these com-monsters in chiefs… NOW! is the time for Deadpool… In Wade We Trust!
Vol 6: January 2016
My people will ask you to sign a non-disclosure agreement. You must never divulge that I worked for free.
Vol 7: August 2018
MERCIN’ FOR A LIVING! Skottie Young and Nic Klein bring you the craziest tales of the Regeneratin’ Degenerate yet! It’s been a while since Deadpool’s had to merc to make ends meet, but things are tough all over. While Deadpool tries to get his humble mercenary-for-hire business back off the ground, a catastrophic threat so unfathomably huge, so mind-breakingly cataclysmic it defies description, is heading toward Earth, and there’s only ONE PERSON WHO CAN STOP IT!!! Oh no, wait… it’s not Wade, is it? Oh, It’s Wade.
Vol 8: November 20 2019
Deadpool’s newest mercenary job has him going after the King of Monsters, who has claimed a new kingdom for his monstrous subjects…on Staten Island! But you know what they say, when you come at the king, you better not miss! The Merc with a Mouth finds himself neck deep in political intrigue, monster law, and a monster hunter out for blood! It’s like The Crown but with even more swords and monsters! Can Deadpool’s smooth charisma and deft diplomacy allow him to keep his head, or will he be royally screwed?
Vol 9: November 2, 2022
MARVEL’S TOP MERC IS BACK IN BUSINESS!
We all know Wade Wilson is one of the top mercenary/assassins in the Marvel Universe, even if he is simultaneously the most annoying one…but he’s pushing to make that recognition official as he auditions for the elite group known as the Atelier. Now, he has 48 hours to kill one of the world’s most famous supervillains. Only problem? He’s been kidnapped, and something…strange…is GROWING INSIDE HIM. Things are going to get gross as writer Alyssa Wong (DOCTOR APHRA, IRON FIST) and artist Martin Coccolo (BANNER OF WAR) take out their pent up aggression on everyone’s pizza-faced, jabber-mouthed, misguided, hate-to-love, love-to-hate fave…Deadpool!