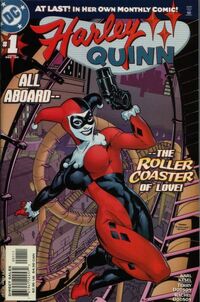 Vol 1: December 2000 – January 2004
HARLEY QUINN is not the story of an honorable woman and her quest for justice. Instead, it’s a love story gone horribly, horribly, horribly wrong, especially in the first extra-length issue, as the Joker’s girlfriend must do without Mister J’s “calming” influence. And considering just how many sandwiches short of a picnic Harley is, you know this book’s going to be wild! Harley is driven to astounding lengths to free her loony lover. And that’s just in the first seven pages. What follows is too strange for words, though it does involve one itsy-bitsy cameo by Batman. Just one! Once you see life through the eyes of Harley Quinn, you’ll find she makes a lot more sense. Would you believe a little more sense?
Vol 2: January 2014
This bombastic debut issue features art by award-winning illustrators including Darwyn Cooke, Sam Kieth, Tony S. Daniel, Paul Pope, Walter Simonson, Art Baltazar and others-but will any of them measure up to the exacting standards of the Clown Princess of Crime? Don’t miss the thrilling return of Harley Quinn in her own monthly series!
Vol 3: October 2016
“Die Laughing” part one! Welcome back to Harley Quinn’s crazy world on Coney Island…now get ready to wave goodbye, because everyone there just might get eaten alive! Harley’s gotta protect her neighborhood against an all-out zombie apocalypse! Break out the chainsaws, everybody!
Vol 4: March 23 2021
Ahem! You better read this closely, ’cause we’ve got a red-hot relaunch on our hands here-and I should know! Harley Quinn here to let everyone know that I got a brand-new monthly series here with a brand-new status quo. I’m coming back to Gotham City to make up for the sins of my past, and help the city recover from “The Joker War”!
But there’s no welcoming committee waiting for me, your favorite Maid of Mischief! And between you and me, some real creeps are working to keep the city broken. We can’t let that happen, can we? Rising-star writer Stephanie Phillips, my new partner in crime, takes me into a bold new era with her partner in artistic crime Riley Rossmo, who I gotta say designed a real nice new costume for me. You’re not gonna wanna miss this one, folks!