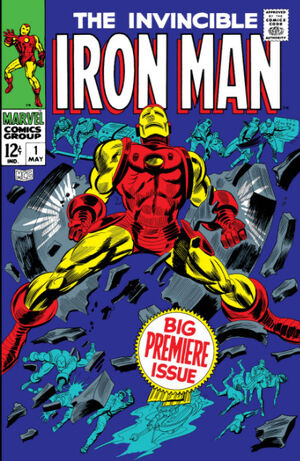 Vol 1: March 1968 – July 2013
Iron Man is captured by A.I.M using a suction beam and trapped in a submarine by orders of Mordius. Meanwhile A.I.M. soldiers are gloating about how they have sunk The Maggia’s gambling ship and destroyed their leadership. The Golden Avenger is knocked out by gas while back on the sinking Maggia ship Jasper Sitwell is evacuating the passengers. Sitwell stumbles upon Whitney Frost whom he recognises from Stark Industries as one of Tony’s admirers… Vol 2: November 1996 – November 1997
It starts with Tony Starks good friend, and employee “Rebel” testing out the Prometheus Armor (a Pre- Iron Man design), when Rebel pushes the prototype suit too far and it overloads. Sending Tony to court for “Corporate Espionage” and “Insider Trading” in which he easily is found not guilty. With a short and sweet press conference apology, and a dramatic exchange of words with Pepper Potts( leaving Tony soaked in wine and her jobless). Tony continues being a…erm… Vol 3: February 1998 – December 2004
It’s business as usual for dashing multi-millionaire Tony Stark and his armored alter ego, Iron Man, now that he’s returned to the Marvel Universe — or is it? Tony must decide whether to wrest control of the Stark/Fujikawa corporation from his business “partners” or seek to increase his already vast fortune in other ways. He’d better make up his mind quickly, before a mysterious third party hires the Deathsquad to make it up for him! Vol 4: January 2005 – May 2007
XTREMIS: Part 1 (of 6) It’s the beginning of a new era for Iron Man as renowned scribe Warren Ellis joins forces with digital painter Adi Granov to redefine the armored avenger’s world for the 21st century—a landscape of terrifying new technologies that threaten to overwhelm fragile mankind! What is Extremis, who has unleashed it, and what does its emergence portend for the world? Vol 5: January 2013 – August 2014
Tony Stark—Iron Man: Technological visionary, wealthy playboy, unparalleled engineer, and armored Avenger. His greatest invention becomes his greatest mistake. Iron Man must act fast…and Tony Stark must build faster! The lethal techno virus Extremis is out in the wild and up for grabs to the highest bidder! It’s up to Tony Stark to contain it and that means creating a new suit of armor…NOW! Vol 6: Sep 16, 2020
BIG IRON!
Tony Stark is looking to restart his engine. He decides he’s going back to basics, putting away his high-tech toys and high-profile image so he can get his hands dirty again. It’s time to dig into the guts of real machines, put on some old-fashioned metal and fly.
But can he really lay that Stark-sized ego down? Life isn’t that simple, something that old friends and frustrating foes are quick to point out. If you strip down a billionaire to his bolts, does he run solid or just overheat?
Tony’s going to find out once a threat to the entire universe rears its head from the past. As he suits up again, Tony remains sure of one thing: he’s still IRON MAN down to his flesh and blood core.