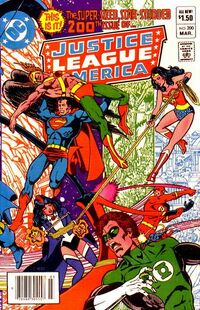 Vol 1: November 1960 – April 1987
Superman! Batman! Wonder Woman! The Flash! Green Lantern! Aquaman! The Martian Manhunter! The Justice League of America in its very own series! But will their first adventure be their last? Featuring the first appearance of the mind-controlling villain Despero!The Flash must rescue his fellow JLAers from Despero, the alien dictator from another dimension. But can even the Scarlet Speedster find a way to rescue his comrades from “The World of No Return.
Vol 2: September 2006 – October 2011
It begins here – a bold new era for the World’s Greatest Heroes by New York Times best-selling author Brad Meltzer and superstar artist Ed Benes! It’s Superman, Batman, Wonder Woman…and the true roster of members who will become the new Justice League of America. Join us as we head into “The Tornado’s Path.
Vol 3: April 2013 – July 2014
The march toward Trinity War begins with part one of “World’s Most Dangerous”! Green Lantern! Green Arrow! Catwoman! Katana! Vibe! Hawkman! Stargirl! They aren’t the world’s greatest super heroes-they’re the most dangerous! But why does a team like the JLA need to exist? What is their ultimate mission? And who is pulling the strings? Plus: Find out why Martian Manhunter is the most dangerous of them all. Period.
Vol 4: 2015
It’s massive widescreen JUSTICE LEAGUE action and adventure from superstar writer/artist Bryan Hitch! In this extra-sized debut issue, the League comes up against an armada of aliens heading for Earth that claims to be a peaceful religious tribe. But something sinister is lurking in their ranks… something with ties to ancient Krypton!
Vol 5: April 2017
SPINNING OUT OF THE PAGES OF JUSTICE LEAGUE VS. SUICIDE SQUAD!
Writer Steve Orlando and artist Ivan Reis bring together a new Justice League of America with past members and unlikely heroes alike!