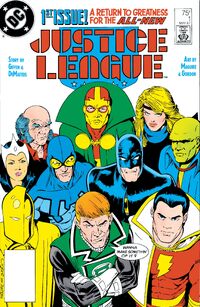 Vol 1: May 1987 – October 1987
Under the scrutiny of the media, the members of the new Justice League come together for their first meeting. By the time most of the team has assembled, Guy Gardner, the Green Lantern, calls the meeting to order and demands to be the new commander of the team.
Vol 2: October 2011
Comics superstars Geoff Johns and Jim Lee make history! In a universe where super heroes are strange and new, Batman has discovered a dark evil that requires him to unite the World Greatest Heroes!
Vol 3: 2016
Spinning out of the events of DC UNIVERSE: REBIRTH #1, a new day dawns for Earth’s greatest heroes as they welcome three new members to the team, including…Superman? Who is this strange visitor from a dead world—and can he be trusted? Batman and Wonder Woman aren’t so sure.
Vol 4: June 6 2018
“THE TOTALITY” part one! A brand-new era begins here! Comics legends Scott Snyder and Jim Cheung launch the Justice League into a cosmos-shaking mystery that will draw out their most terrible foes…in ways our heroes couldn’t possibly imagine! In this debut issue, Martian Manhunter struggles to protect the team from an incoming threat that will shatter the world as they know it, while a familiar face strikes out on a dark path…