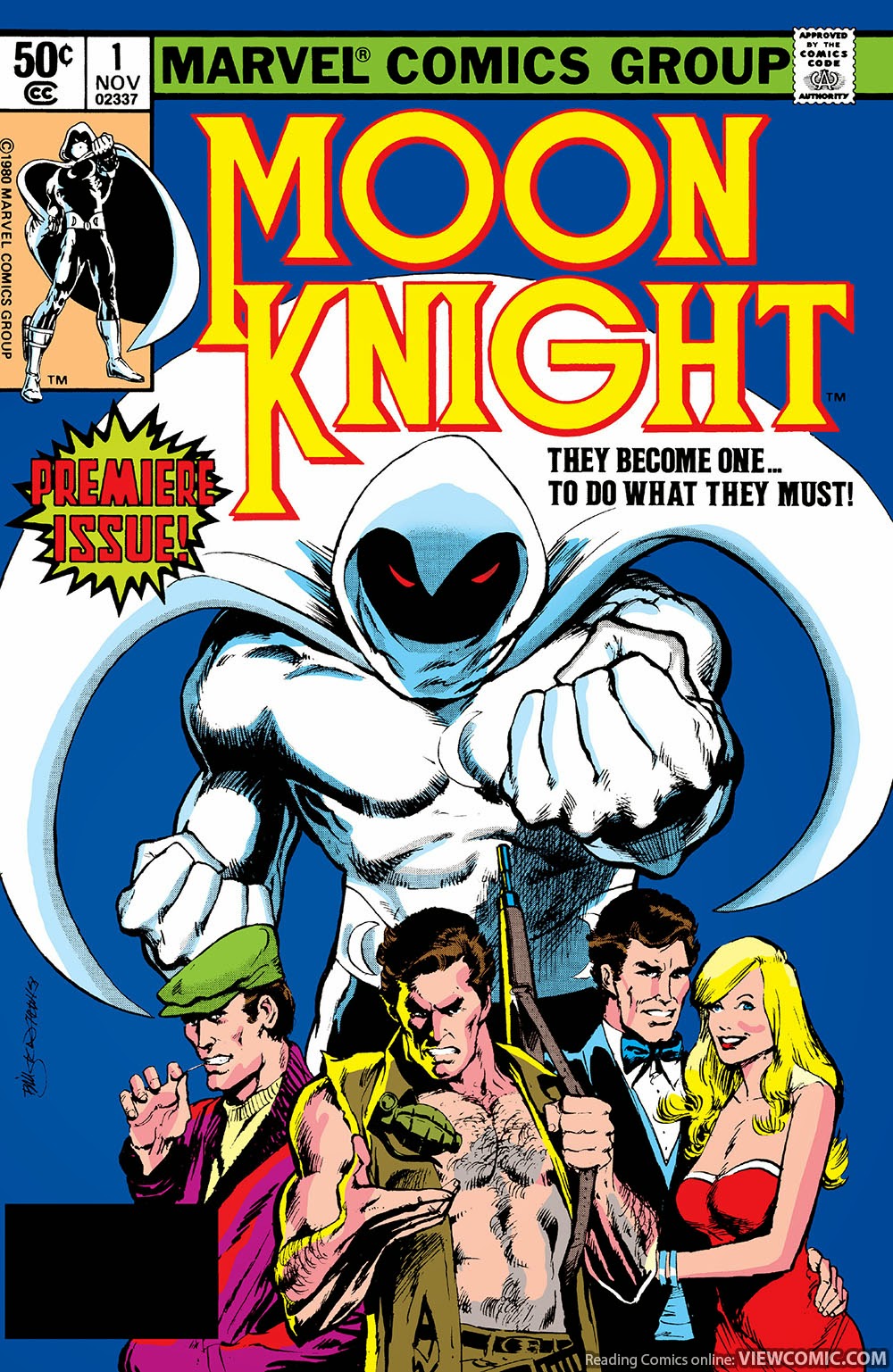 Vol 1: November 1980 – July 1984
Before he was the macabre Moon Knight, he was mercenary Marc Spector. Witness the origin of the hero known as Moon Knight! Cloaked in the spirit of the Egyptian moon god, Moon Knight swears vengeance on “Bushman”, the mercenary who takes innocent lives and leaves his colleagues for dead.
Vol 2: 1985
Six issues mini-series.
Vol 3: January 1998 – April 1998
…
Vol 4: February 1999
Someone is trying to assassinate Marc Spector, but before he can find out why, the shooter kills himself. Crawley informs Marc of strange experiments being conducted on homeless people, so Marc investigates and discovers that The Company is behind them. Marc contacts an old colleague (and fling), Candace Calder, who still works for them, and arranges a meeting, much to Marlene’s dismay. During the meeting, Marc is shot at, and after taking chase, the assassins kill themselves also.
Vol 5: June 2006 – July 2009
The Fist of Khonshu is back and badder than ever, courtesy of acclaimed novelist Charlie Huston and red-hot, fan-favorite artist David Finch.
Marc Specter used to talk to God. His god anyway. Khonshu — God of the Moon, God of Vengeance — saved Spector’s life, brought him to glory, made him a hero. Made him Moon Knight. But what Khonshu gives, he also takes away. And once he takes, he takes for good. Spector learned this the hard way, spiraling into madness, depression and worse. But he also remembers. Remembers what it felt like to jump off the top of a six-story tenement, cloak spread behind him. Remembers the feel of cartilage and bone exploding beneath his fists. Remembers the fun stuff. Now Specter wants back in the game. Will Khonshu hear his prayer?
Vol 6: July 2011 – June 2012
The desert, somewhere hot. A villain named Bushman is seen in a stand-off with Jake Lockley, the apparent hero of the story. Lockley is shot and crawls into an old temple, barley living. A lady appears, running up to Jake shouting “Not like this!”. It’s then revealed that this is merely a film produced by none other than Mark Spector, AKA Moon Knight! While the show is being show, Mark is called out onto a balcony by his Avenger friends. The group tells Mark that he needs to “go to work” as crim…
Vol 7: May 2014 – September 2015
Marc Spector is Moon Knight!…Or is he? It’s hard to tell these days, especially when New York’s wildest vigilante protects the street with two-fisted justice and three-that’s right, count ’em-different personalities! But even with the mystical force of Khonshu fueling his crusade, how does the night’s greatest detective save a city that’s as twisted as he is? The road to victory is going to hurt. A lot. Marvel’s most mind-bending adventure begins NOW as Moon Knight sleuths his way to the rotten core of New York’s most bizarre mysteries!
Vol 8: June 2016
HE BOOK YOU’D BE INSANE TO MISS!
Marc Spector (a.k.a. Moon Knight/Jake Lockley/Steven Grant) has been fighting criminals and keeping New York City safe for years… or has he? When he wakes up in an insane asylum with no powers and a lifetime’s worth of medical records, his whole identity (indentities) are called into question. Something is wrong, but is that something Marc Spector himself? Jeff Lemire (EXTRAORDINARY X-MEN) and rising star Greg Smallwood are calling everything you know about Moon Knight into question.
Vol 9: July 21 2021
I AM MOON KNIGHT!
The mysterious Mr. Knight has opened his Midnight Mission, his people petitioning for protection from the weird and horrible. The Moon Knight stalks the rooftops and alleys marked with his crescent moon tag, bringing violence to any who would harm his people. Marc Spector, in whichever guise he dons, is back on the streets, a renegade priest of an unworthy god. But while Khonshu languishes in a prison that Moon Knight put him in, Moon Knight must still observe his duty: protecting those who travel at night.
Let it be known – Moon Knight will keep the faith.