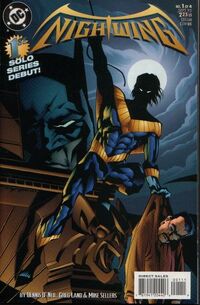 Vol 1: September 1995 – December 1995
Dick briefly considers retiring from being Nightwing forever before family papers uncovered by Alfred reveal a possible link between the murder of the Flying Graysons and the Crown Prince of Kravia.
Vol 2: October 1996 – April 2009
The solo book sees the former Robin trying to be his own man, but often leads him back to his roots with Batman. Having left Bludhaven, Nightwing is now re-inventing himself and rediscovering his passion for crimefighting.
Vol 3: November 2011 – July 2014
Dick Grayson flies high once more as Nightwing in a new series from hot new writer Kyle Higgins (Batman: Gates of Gotham)! And as he embraces his destiny, Haley’s Circus, the big top where Dick once performed, returns to Gotham City – bringing with it murder, mystery and superhuman evil. Nightwing must confront his past, among former friends and enemies from his circus days, while uncovering a much greater evil!
Vol 4: 2016
He’s been Robin, Batman, a spy, a ghost. Now, Dick Grayson returns to Gotham City to reclaim the life that was taken from him. But when a new evil threatens those he loves most, Nightwing faces being torn away from home once again in order to destroy the dark force once and for all. Powerhouse artist Yanick Paquette (BATMAN, SWAMP THING) joins series writer Tim Seeley (GRAYSON, BATMAN & ROBIN ETERNAL) to return Nightwing to the DC superhero stage!