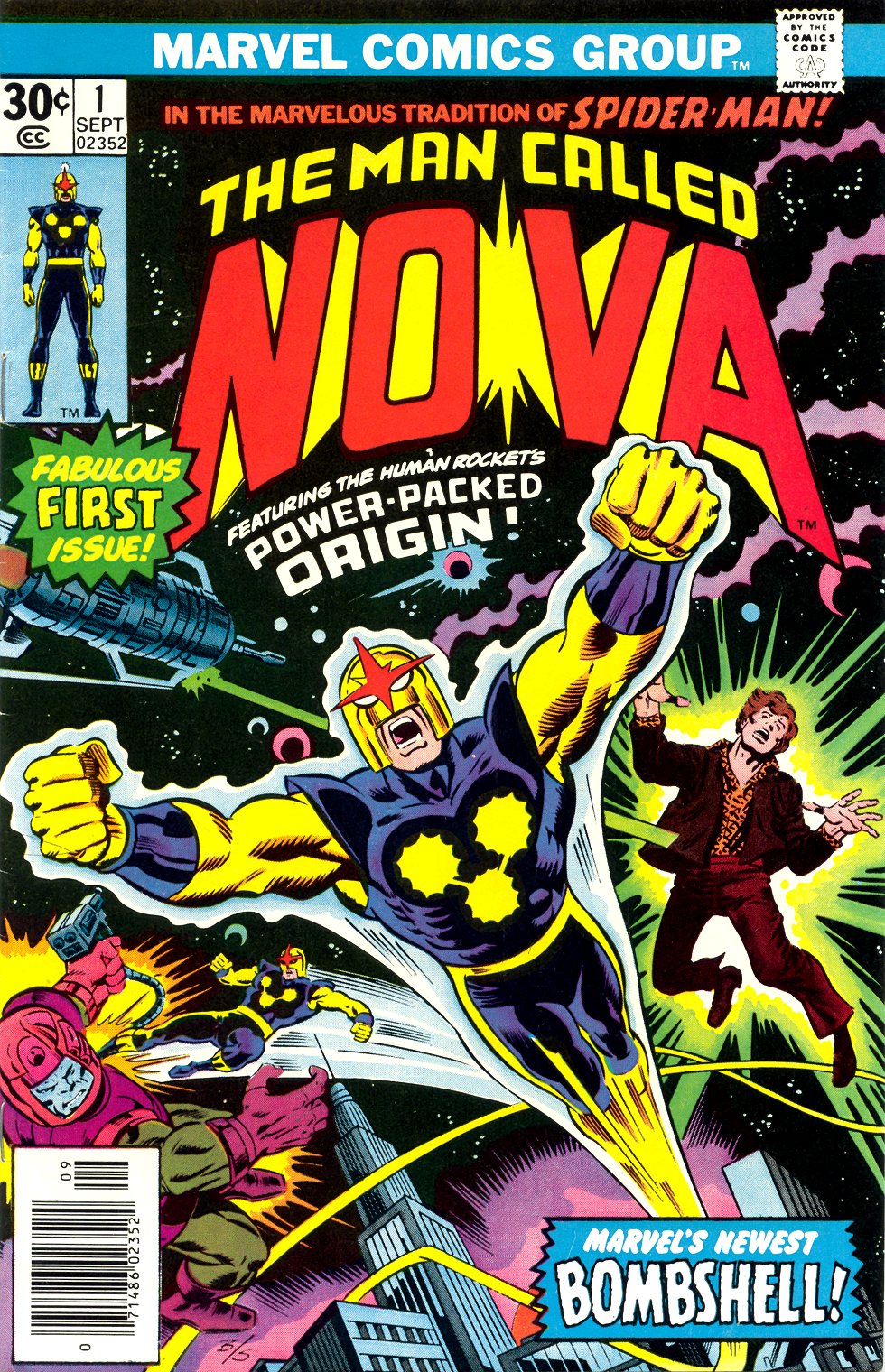 Vol 1: September 1976 – May 1979
Richard Rider always dreamed of being a hero, that dream just came true. Hurtling through outer space, Nova Prime pursues the monster that destroyed his planet, but he is gravely injured and on the verge of death. He seeks out a worthy successor to pass on his considerable powers to. Rider is struck down by an emerald beam of light, but when he awakes he has all the amazing abilities of a Centurion. Now, Nova Prime’s mission has become Richard Rider’s. He must stop the murderous alien known as Zorr or his own world is doomed.
Vol 2: January 1994 – June 1995
Gladiator helps a trio of Shi’ar test Nova to make sure he is worthy of his power.
Vol 3: May 1999 – November 1999
Nova is back with an all new series. The series however only lasted for 7 issues due to failing sails. Issue 7 makes the 50th Nova issue in total, which is celebrated in the comic
Vol 4: June 2007 – June 2010
Exploding from the pages of Annihilation, Nova rockets into his own ongoing series! In the wake of the chaotic Annihilation Wave, a desperate galaxy cries out for law and order. In the past, an army of peacekeeping Centurions delivered stability. But the Nova Corps are dead and gone – now there is only Richard Rider, the man called Nova. But can a lone human police an entire universe? He has near limitless power – now he must do all he can to bring punishment to the wicked, help to the oppressed, and justice for all!
Vol 5: April 2013 – July 2015
You’ve followed him through the history making (and changing!) AvX and now the mystery of the all-new Nova are revealed in this breathtaking new ongoing by the best-selling, award winning team of Jeph Loeb and Ed McGuinness (RED HULK, Avengers X-Sanction).
Sam Alexander is a kid bound by the gravity of a small town and a father whose ridiculous, drunken fairy tales about a “Nova Corps” were just another heavy burden in a life full of them. But luckily for Sam Alexander… soon gravity won’t even matter. And those troubles? It’s like they’re a billion miles away.
Vol 6: January 2016
Since 2013 we’ve had Sam Alexander defending earth as Nova. His father Jesse has been missing, and Sam has recently found him and now father and son are saving the day together as Novas. This new series will hopefully focus on Jesse Alexander more than Sam, but based on the first issue it focused on Sam just as much. Should Sam be in this entire series as a main character along with his dad? Sam already has his own series and not to mention he’s now part of the Avengers, seems like he has enoug…
Vol 7: December 7 2016
Rich Rider makes his roaring return to the Marvel Universe! How will Sam Alexander cope with this unfathomable homecoming? It’s the return you’ve all been waiting for. Or is something…else? Strap in True Believer, you’ve never seen a NOVA book like this before!