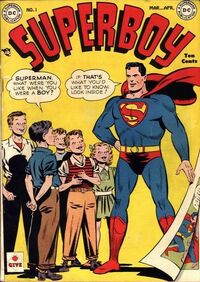 Vol 1: Mar/Apr 1949 – December 1979
Superboy (Volume 1) began publication in March-April of 1949. At first published as a bi-monthly comic book, DC began scheduling Superboy for eight issues a year beginning with issue #29. By 1966, DC began distributing nine issues of Superboy per year and the title eventually became a monthly series in 1972. By issue #197, Superboy began having adventures in the 30th century with his friends, the Legion of Super-Heroes. Beginning that same issue, the Legion became reoccurring characters in the series, and even shared cover credit on each issue. With issue #222, the title officially changed to Superboy and the Legion of Super-Heroes. By the end of 1979, Superboy returned to the 20th century, and with issue #259 the series became known as the Legion of Super-Heroes.
Vol 2: January 1980 – June 1984
Also known as the New Adventures of Superboy, this series was published by DC Comics from January of 1980, until June of 1984, branching off from Superboy and the Legion of Super-Heroes, which also split into Legion of Super-Heroes (Volume 2) and from the Superman Family Vol 1. Like its predecessor, Volume 1, this title focused on the adventures of young Clark Kent before he became Superman. The majority of his adventures took place in his home town of Smallville, Kansas. The title contains the final appearances of the Earth-One Superboy prior to the eradication of the Earth-One continuity during the Crisis on Infinite Earths. Between 1984 and the 1986 Post-Crisis continuity relaunch, the only Superboy to appear in DC Comics was Superboy-Prime.

The first 27 issues feature a rotating roster of backup features: “Superboy’s Secret Diary”, featuring untold stories from Superboy’s past; “Strange Encounters of the First Time”, featuring Clark Kent’s first meetings with various characters around the DC Universe; and features starring Krypto the Super-Dog and Clark Kent as Superbaby. For the rest of the series, the backup is Dial “H” for Hero, picking up where it left off in Adventure Comics.


Vol 3: February 1990 – February 1992
uperboy (Volume 3) was published from February of 1990 until June of 1991. This series took place outside of modern continuity and was based on the 1988 Superboy live-action television series. With issue #11, the title officially changed to the Adventures of Superboy until its cancellation with issue #22. Classified as Earth-988 in the Crisis on Infinite Earths: The Compendium
Vol 4: February 1994 – July 2002
Superboy (Volume 4) was published from February of 1994 until July of 2002, spanning a total of 102 issues, including a Zero Hour tie-in #0 and a DC One Million tie-in #1000000. This series is significant because it is the first Superboy comic to ever feature a title character other than Clark Kent. It is also the first canonical Superboy series published in the Post-Crisis era.
Vol 5: January 2011 – October 2011
Superboy (Volume 5) premiered in January 2011. It is the fifth series centering around Superboy and the second series to center around Conner Kent (after Volume 4).
Vol 6: November 2011 – October 2014
Superboy (Volume 6) is one of The New 52 ongoing series to be published after Flashpoint.